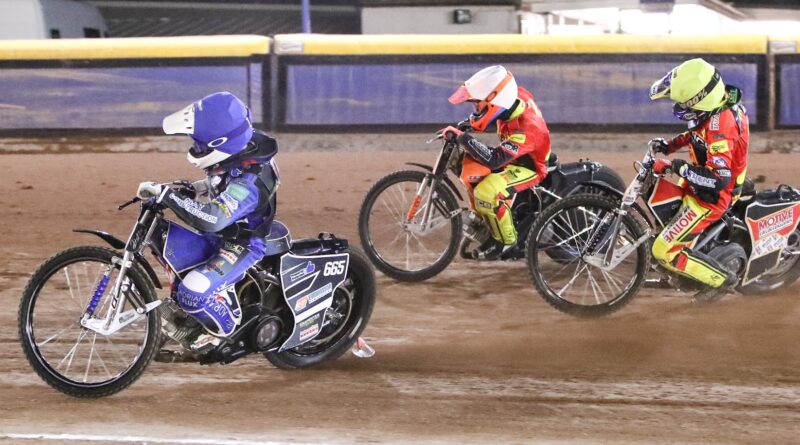 OXFORD Chargers took a 46-44 victory in the first leg of their National League play-off semi-final against Leicester Lion Cubs at Oxford Stadium last night (Wednesday) due to a moment of magic from two 15-year-old riders.

The scores were locked at 39-39 after 13 races entering a crucial Heat 14. Ashton Boughen – making his first appearance at National League level and already an impressive winner of Heat 2 – picked up a warning for moving at the start in the initial attempt to stage the race.

That placed Chargers four points in the front going into the concluding Heat 15. Leicester pairing Dan Thompson and Connor Coles were fastest from the tapes, and while Thompson completed his paid maximum, Oxford skipper Jordan Jenkins passed Coles at the start of the second lap and then Sam Hagon also started to challenge Coles, although Hagon’s race ended on the third lap, when he fell.

But Jenkins’ second place was enough to ensure Chargers have a two-point lead to take to the Paul Chapman & Sons Arena in the second leg on Saturday.

The evening did not start in great fashion for Chargers when Jenkins fell while trying to dive inside Dan Thompson in Heat 1. There was a moment of confusion as the all riders slowed, expecting a stoppage, before Leicester took a 5-1, while Jenkins remounted at the back.

But Boughen and Jacob Clouting levelled the scores with a fine 5-1 in Heat 2, and then Scott took a notable victory over Coles in a shared Heat 3, after a fine inside run on the second bend.

Recent new father Clouting then defeated Joe Thompson as Heat 4, with Henry Atkins third, as Chargers took the lead with a 4-2.

Leicester had a trump card 15-year-old of their own in Max Perry, and he and Dan Thompson overhauled early leader Sam Hagon in Heat 5, as Lion Cubs retook the lead with a 5-1.

Joe Thompson led Heat 6, but Jenkins passed him in fine style at the halfway stage of the race, as Chargers levelled it at 18-18. Coles won Heat 7 ahead of Atkins, while Boughen passed Tom Spencer for third in a 3-3.

Jenkins soon streaked past Mickie Simpson in Heat 8, while Clouting just held off the previously unbeaten Perry in a fine scrap for third place, as Chargers again went ahead by a couple of points.

After a shared Heat 9, there was a hard-fought battle for third in Heat 10 behind Jenkins and Coles. Spencer left a hole for Atkins on the third bend of the final lap, and Atkins didn’t need a second invitation. But, as Atkins came though the gap, Spencer attempted to shut the door and the result was a collision and an alarmingly spill for Spencer. The fallen Leicester rider was okay, while the result stood, as Chargers increased their advantage to four points with a 4-2.

Lion Cubs hit back with a 4-2 of their own in Heat 11, before Coles won Heat 12, with Hagon and Clouting packing the minor placings for Chargers, despite Simpson still being right up with Clouting at the end of the race.

Heat 13 looked like it would be shared, but Atkins then suffered a major tyre problem which saw him forced out of the race and lose third to Joe Thompson, allowing Lion Cups to level the scores heading into the final two races.

Jenkins top scored for Chargers on 13 points, while the rest of the side were solid, and each scored at least six points apiece. While Lion Cubs relied on their top-end strength, Chargers were stronger at reserve, with Clouting (7+2) and Boughen (7+1) outscoring their opposite numbers by 14 (paid 17) points to just four.

Boughen looked exceptionally quick out in front and it took until Heat 10 for another rider to register a faster winning time than his time for Heat 2. It’s too late for any side to sign him this season, although there is nothing to stop him appearing in guest appearances as an unattached rider, as Chargers did last night.

Jody Scott said: “We were all trying our best tonight and I’m very pleased to score 7+2. It was getting really close and then Ashton and myself got a 5-1 in Heat 14 and that saved us and meant that we won the meeting after Jordan got the second place in the final race.

“In Heat 14, I was neck and neck with Tom Spencer down the straight and got into second place. After that, I just held the throttle to keep the two Leicester riders behind me to make sure we took a 5-1.

“I was very happy with that race, as I was with beating Connor Coles in Heat 3 – that boosted my confidence.

“We’ve won the meeting, we’ve got the lead and we’ve got to do our best at Leicester and keep ourselves ahead. I’ve ridden at Leicester quite a lot. We didn’t go so well at Leicester last time, but we’ll be looking to up our game this time to get through to the final.

“I’ve really enjoyed riding for Oxford this year. It’s been really good and it’s the right place for me. I’ve enjoyed every minute here. I like the track – it’s prepared really well, Jamie (Courtney) does a really good job with it. I’d love to be back at Oxford next year.

“We all get on as a team. It’s also great have Peter (Schroeck) as my manager, since he’s the one who started me off and taught me how to slide a bike at Rye House.”