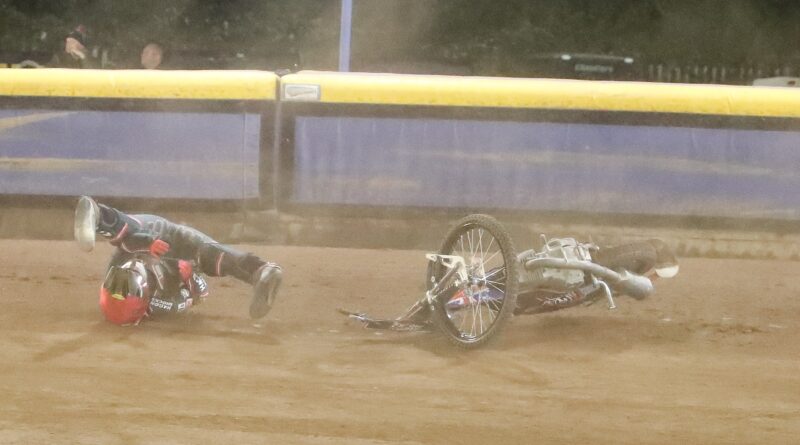 Hagon was chasing Connor Coles for third place during the final race of the 46-44 victory over Leicester Lion Cubs – in the first leg of the National League play-off semi-final tie – when he took an awkward tumble at the start of the third lap.

Oxford have booked Adam Roynon as a guest for Hagon, for the second leg at Leicester on Saturday night. Roynon scored a 14+1 paid maximum in his previous guest appearance for Chargers.

In addition, Ashton Boughen, fresh from his sensational 7+1 score for Chargers last night, will again cover for the injured Arran Butcher at No 6 on Saturday. Butcher is out for two months after suffering a back injury in the British Sand Masters at St Annes North Beach at the weekend.

In a sensational first-ever appearance at this level, 15-year-old Boughen – a former Motocross British Champion – won his first-ever NL race in Heat 2 in an impressively fast time, while he combined with fellow 15-year-old Jody Scott for a priceless 5-1 in Heat 14.

Boughen finished eighth in the world in his Motocross class in 2019 and started riding speedway in June 2022. He’s already raced speedway in Denmark and is a protégé of Oxford team manager Peter Schroeck.

Schroeck said: “It’s gutting for Sam, who is going to be ruled out for 4 to 6 weeks, which puts him out of the rest of the season.

“As soon as I knew Sam was out, I was straight on the phone to Adam Roynon to ride for us at Leicester. Adam has finished for both Scunthorpe and Plymouth and had packed his gear away for the year, but we get on really well with him, so he’s agreed to unpack it again for us!

“Ashton is looking forward to riding for us again. He was fantastic for us at Oxford. His winning time in Heat 2 wasn’t bettered until Heat 10, while his 5-1 with Jody in Heat 14 could be so important in the momentum over the course of the two legs.

“I’ve done a lot of training with Ashton up at Leicester, so he can’t wait to ride for us there on Saturday. I remain quietly confident about our chances.”