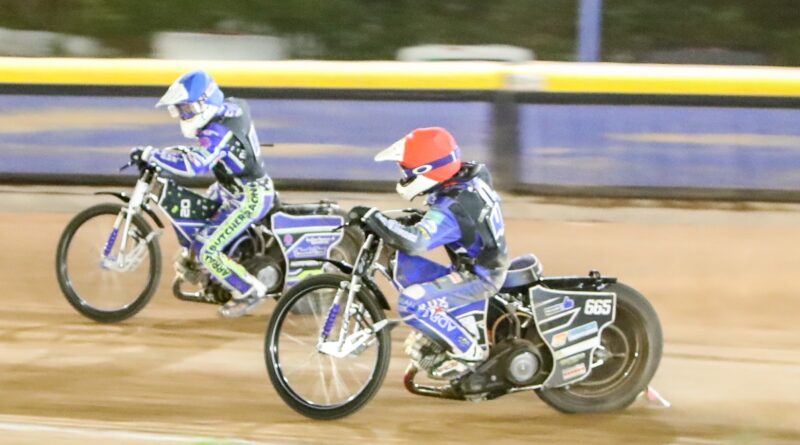 The result puts Chargers back in the fourth and final qualifying position for the National League play-offs, one point ahead of Belle Vue Colts. Belle Vue have superior race points difference, so Chargers will be hoping that Colts emerge from their final regular match at Armadale (on September 30) without any league points. If Belle Vue lost by seven points or more at Armadale and failed to take any league points, Chargers would qualify for the play-offs.

This was an emphatic performance by Chargers, despite missing four team members – Nathan Stoneman and Luke Killeen (both injured), Sam Hagon (riding in Europe), and Jacob Clouting (family commitments).

The scores were locked together at 9-9 after three races, but Charges then took off and six successive heat advantages left the score at 37-16 after nine races and more-or-less over as a contest.

Oxford skipper Jordan Jenkins took a six-ride paid maximum. He was troubled only once, in the opening race, when he took a lap to pass Kent guest Lee Complin to join Henry Atkins for a 5-1.

Guest Adam Roynon also scored a paid maximum (14+1), despite a 15-metre penalty for exceeding the two-minute allowance in Heat 6 after he came out in the wrong helmet colour. Off his penalty, he quickly passed Chris Watts and then rounded Ben Morley with a fine overtake with one lap remaining.

Roynon was okay after a nasty-looking incident in Heat 5, when he was knocked off by Complin on the second bend. With Complin excluded, Chargers took a 5-0 from the re-run, after Sam Woods took a heavy tumble.

Henry Atkins also piled up the points with 13+1 from six rides, starting with three race wins. Even in Heat 13 where he finished last, he didn’t give up without a fight and was still chasing Morley on the final lap. He joined Jenkins for a final heat 5-1 in Heat 15. It was announced during last night that Atkins is now an Oxford Speedway asset.

15-year-old Jody Scott was again massively impressive. He fell in Heat 3, losing control shortly after passing Danno Verge on the final lap, while he suffered a cruel engine failure within sight of the chequered flag in Heat 10, which dropped him from second to fourth. Those mishaps were the only points he dropped, as he took three paid heat wins to finish with 6+3.

Arran Butcher started the meeting slowly when he fell and remounted in Heat 2. His next outing in Heat 7 score him push Verge all the way for second place, just missing out in a photo-finish after a last attempt to round Verge off the final bend. Butcher then finished the meeting with a flourish and was unbeaten in his final three rides.

Kai Ward, an unattached replacement for Clouting, showed plenty of spirit on his first appearance at Cowley, and finished his evening with two points.

Oxford team manager Peter Schroeck said: “We couldn’t have asked any more from the lads tonight. They did everything we asked from them and more. I’m really proud of them.

“We know Adam (Roynon) is a class act with lots of experience and that he’d do a great job as our guest. He had two on the trot at one point, forgot to change his helmet colour in between and had to go 15 metres back, but still went out and passed their riders and we had a good laugh about it afterwards. There was such a good atmosphere in the pits tonight – we didn’t put any pressure on the lads and we just got stick in.

“Jordan and Henry again scored points for us in the big rides at the end of the meeting. They are Oxford through-and-through. Jordan is a great skipper and leads by example as well as helping out the rest of the lads throughout the meeting.

“I’m really pleased that we now have Henry as an asset. He’s a great lad. He’s already a top rider at National League level and hopefully we can help him develop over the next few years and make him the rider we know he can be. We look forward to working with him in the long run.

“While you expect Jordan, Adam and Henry to bang in the points at this level, in some ways it was Jody and Arran who were even more impressive tonight.

“Jody did such a good job and only dropped points in the races where he hit trouble. He was unlucky when he broke down at the end of one race. Jody was so solid and looked great again.

“Once Arran got going, he was making some great starts and was looking very comfortable on the bike and it’s great how he has progressed as a rider this season.

“Kai (Ward) came in today and did everything we wanted him to do. It was nice for him to come into a winning environment and picked up some valuable experience.

“We did everything we could tonight, but our play-off hopes are now out of our hands. We’ll now see what happens at Armadale. I think we deserve for a bit of luck to swing in our favour, because we’ve had more than our fair share of bad luck over the season. It’s a shame we were missing key riders though injury in certain meetings, as otherwise we would already in the play-offs. But there’s no point in ‘what ifs’.

“I won’t be following the Armadale v Belle Vue meeting heat-by-heat because there’s no point worrying about something that we have no control over – I’ll just find out the final result and see whether we’re in or not. Whatever happens, I’m very proud of the boys and how they have developed as riders over the course of the season. And while we’ve still got our eyes on the prize for this year, we’re already also looking forward to 2023.”