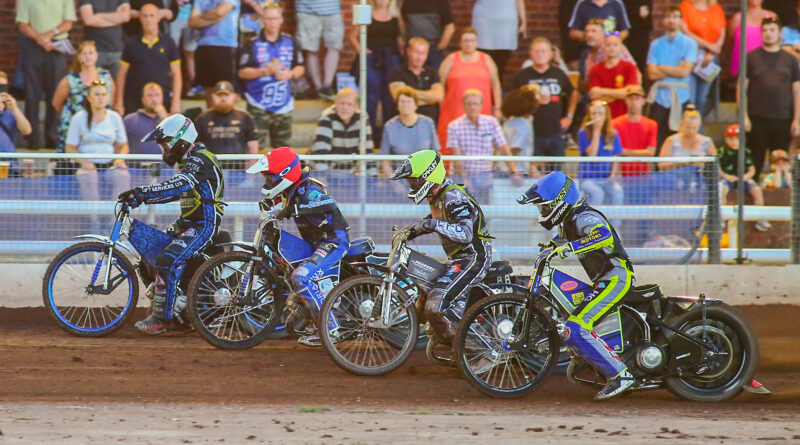 DEPLETED Oxford Chargers gave their everything at West Row yesterday afternoon (Sunday), before Mildenhall Fen Tigers pulled ahead in the closing stages to record a 55-32 victory.

It was Chargers’ second defeat to Mildenhall within four days and means that Fen Tigers replace Chargers in fourth position in the National League table, as Chargers slip out of the play-off places.

Chargers were hit by the blow that Jordan Jenkins was back on the sidelines with abdominal damage. He had ridden at Peterborough on Thursday and Redcar on Friday but had wanted to withdraw after two rides from the latter meeting. The Redcar promotion persuaded him to complete the meeting, but the end result is that the 21-year-old Chargers’ skipper was left in considerable pain and advised by Oxford team manager Peter Schroeck to make a hospital visit on Saturday. That visit revealed Jenkins is in no fit state to currently ride a speedway bike.

After Jenkins’ withdrawal was confirmed, Chargers searched for a guest replacement and moved in for Berwick’s Greg Blair, after several other riders turned down the booking. Blair was used for the injured Nathan Stoneman, while rider replacement switched to No 1 for Jenkins.

The meeting at West Row did not start well for Chargers. Jason Edwards and Josh Warren flew out of the start in Heat 1, and Henry Atkins tried hard, but could not dislodge Warren from second place, as Fen Tigers started with a 5-1.

Heat 2 was bizarre. The initial staging saw Warren fend off Arran Butcher and Jacob Clouting on the opening lap, but Warren came down on the opening bend of lap 2. Fortunately, the other three riders quickly laid down their bikes. But the referee’s decision was to exclude both Warren and Butcher from the re-run, which seemed extremely harsh on Butcher, who had very promptly laid his bike down when he’d seen Warren was in trouble in front of him and therefore avoided a nasty pile-up which could have left one or both of the riders injured.

With just two riders left in the re-run, Clouting looped his bike out of the gate and landed painfully, forcing his withdrawal from the rest of the meeting with an elbow injury and reducing Chargers to five riders for the remaining 13 races. With just Luke Muff left, he won the second re-run as Fen Tigers won the race by an unusual 3-0 scoreline.

The meeting continued to resemble more closely resemble a Demolition Derby than speedway, when Jack Kingston locked up and caused both him and Sam Hagon to come crashing down in Heat 3. Fortunately, despite the alarming spill, both riders were able to continue in the meeting, while the race was awarded as a 3-3.

In Heat 4, Mildenhall guest Lee Complin headed home Butcher, while it was clear than Blair was clearly struggling with the testing West Row track, as Muff came through to take third place, as Fen Tigers pulled further ahead with a 4-2.

Atkins became Chargers’ first heat winner in Heat 5, after passing Alex Spooner on the opening lap. Meanwhile, Jody Scott put Kingston under pressure for third, with the result that Kingston lost control and narrowly avoided falling at the start of lap 3, before limping off the track with his damaged machine, as Chargers pulled back a 4-2.

Blair was second early in Heat 6, but fell on the fourth bend, as Edwards and Warren extended Mildenhall’s lead to 22-11 with a 5-1.

Complin won his second race in Heat 7 ahead of Hagon, while Scott produced a very intelligent ride to pass Muff with a lap remaining. Atkins won a shared Heat 8, while Blair and the busy Butcher packed the minor positions behind Spooner in a similarly shared Heat 9.

Heat 10 saw Edwards, unbeaten in his last four NL meetings, beaten by 17-year-Hagon and 15-year-Scott. The Mildenhall skipper missed the gate and Scott rode a sensible race in second place. Coming off the final bend, Edwards made a late dash around the outside, but the referee deemed Scott had held on in a photo-finish. The 5-1 to Chargers meant they headed into the interval with just a seven-point deficit and a league point still looked possible.

Heat 11 was shared, with Warren taking an excellent victory for Fen Tigers, while Hagon and Atkins packed the minor places, after Complin fell and remounted.

Heat 12 was a race of attrition. Hagon fell on the first bend, and the ref’s decision was all four back, while Muff and Butcher collided just before the race was halted. Both stayed on, but Butcher was checked out before the re-start. In the re-run, there was again contact between Butcher and Muff, this time on the first bend, with the result that both Muff and Hagon came down on the outside. At the third time of asking, Fen Tigers held a 5-1, with Butcher pressing Muff until he spun and fell on the final lap, causing the race to be stopped and awarded.

It started a run of 5-1s for Fen Tigers, as the final three races saw maximum points for the home team. By this time, the track was very slick and it was all from the gate and Chargers found themselves beaten out of the starts each time.

Atkins (10+1), Hagon (10) and Scott (6+3) all scored well for Chargers, while Butcher had to take seven rides following Clouting’s withdrawal and finished a bruising afternoon with 4+1. The rider replacement rides for Jenkins scored just four points, while guest Blair scored two in place of Stoneman. Take away those six points and add in 20 for Jenkins and Stoneman and Chargers would have reached 46 in a very similar tale to the home defeat to Mildenhall on Wednesday night.

The defeat does not completely end the play-off hopes of Chargers. While Mildenhall have to win just one meeting against Berwick or Plymouth next Sunday move out of reach, a home win for Chargers against Kent on September 7 would take them two points clear of Belle Vue Colts. Chargers then need to hope that Colts saw no more than one point from their two away meetings at Kent (September 11) and Armadale (date TBC).

Speaking post-meeting, Oxford team manager Peter Schroeck said: “Well done to Mildenhall today, but I am proud of the way our lads battled away, despite the huge blow of going into the meeting without Jordan (Jenkins).

“I spoke to Jordan yesterday (Saturday), to see how he was after riding for Redcar on Friday night. He was in a really bad way and in a lot of pain and hadn’t slept during the night. He had wanted to withdraw at Redcar after his first couple of rides up there, but Redcar are pushing for the Championship play-offs and persuaded him to complete the meeting, which he probably shouldn’t have done.

“I told him to go to hospital to go and get himself checked out, because I wasn’t going to have something happen to Jordan on my watch. He went to hospital and the doctors told him he’s got severe abdominal damage. At the moment, he’s having nothing to eat, because he can’t keep his food down. The doctors advised him: ‘No racing, because you’ll just make it worse.’ Jordan was gutted not to be able to ride for us, but the decision was taken out of his hands by the health professionals who told him he must not ride. Of course, I’d love to have Jordan racing for us today, because he would have made such a difference, but I’m not going to risk a young rider’s health to try to get into the play-offs.

“I then needed to get a guest. On Saturday evening, I tried every angle to get a rider of Jordan’s calibre, but had no luck. None of the boys that are on Jordan’s level were available – they all turned us down. Greg Blair then said yes, so we put him in. He’s come here with the right intention, but he scored just a couple of points for us.

“It’s very frustrating, because the points scored in Jordan and Nathan’s rides did not cover them at all – it was the same at home to Mildenhall on Wednesday. Reaching the play-offs is now going to be an uphill climb and it’s out of our hands.

“But if we were two or three years down the line, I would be much more frustrated, because this is our first year and what we need to focus on is how well the development side is working. We’re doing all the right things and Henry (Atkins), Sam (Hagon) and Jody (Scott) all rode very well today. With Jordan and Nathan alongside them, I believe we would have won.

“I couldn’t have been any prouder when Sam and Jody held back Jason Edwards in Heat 10 and took a 5-1 over him – that was a fantastic race from them.

“I couldn’t fault the lads today. They kept the meeting alive until the closing stages. We were unfortunate to lose Jacob early on. He couldn’t lift his arm after his crash in Heat 2. That meant a busy afternoon for Arran, who also wasn’t quite himself after a couple of crashes, but he still kept on battling away despite that. The boys who gave it their all, despite the fact that we were missing two big hitters.

“I felt Arran’s exclusion from Heat 2 was wrong. I spoke to the referee, who told me that Arran had laid his bike too soon. So I asked the referee: ‘When is too early?’. Is Arran supposed to lay the bike down once he’s hit the rider in front? He laid it down as soon as he saw Josh Warren was in trouble in front of him. This Mildenhall track has a lot of clay in it. If you don’t lay it down immediately, that clay content will carry you forward, and Arran would have smashed into Josh and we’d probably be talking about injured riders. Arran did totally the right thing and avoided a nasty accident and got excluded for it.”

* THE next action at Oxford Stadium is a vital home meeting for Chargers against the Kent Royals a week on Wednesday (September 7), where a victory will see Chargers move back into fourth place ahead of Belle Vue. Tickets are on sale at www.oxfordspeedway.club/tickets.