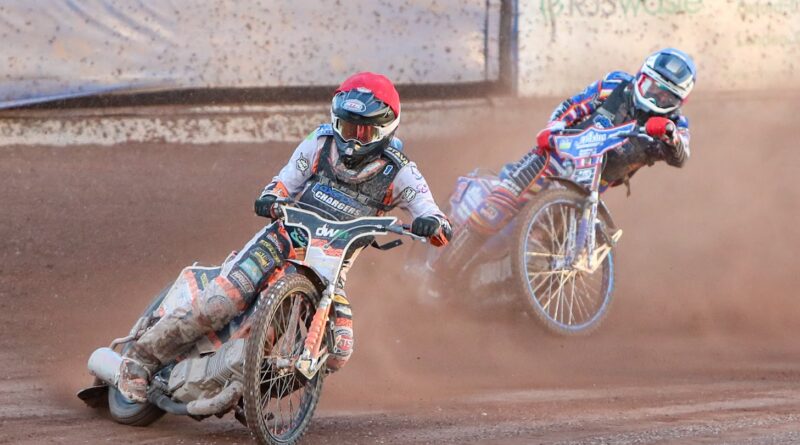 Tigers became the first team to beat Chargers at Oxford Stadium on Wednesday evening as four race advantages in the concluding five heats earned the visitors a 39-51 win.

The result flipped the race for the National League play-offs on its head, with Mildenhall now two points shy of the play-off frame with a meeting in hand over both the Chargers and third placed Belle Vue.

Chargers’ Joint Team Manager Schroeck has backed his side to challenge Mildenhall on their own track, though, and hopes extensive knowledge of the West Row circuit can work to their advantage.

“Mildenhall were the stronger team on Wednesday and deserved victory,” said Schroeck. “But that doesn’t mean we should expect a similar result this weekend.

“We have a good level of track knowledge in our team with Jordan (Jenkins), Henry (Atkins), Sam (Hagon) and Arran (Butcher) all representing Tigers in previous seasons.

“We’ve got to use this to our advantage and throw everything possible at Mildenhall because it’s clear they’re a team in-form with just as much determination as ourselves to reach the play-offs.”

Both Jordan Jenkins and Sam Hagon were part of Mildenhall’s championship winning team last season, while Arran Butcher and Henry Atkins have represented Tigers in recent years too.

At 260-metres in length, Mildenhall is one of British Speedway’s smallest tracks. And Schroeck stated his team are ready to face the challenge.

“We’ve proven to be a capable team on smaller tracks already this season,” added Schroeck. “Our win on the road in Edinburgh was a real highlight, hopefully we can repeat those efforts on Sunday.

“It’s a bowl-like track is Mildenhall. It’s important to keep your momentum going around the corners and into both straights to be successful. It’s technically and physically demanding, but I have every faith in our ability.”

Tapes-up at Mildenhall Stadium on Sunday, August 28, is at 3pm.