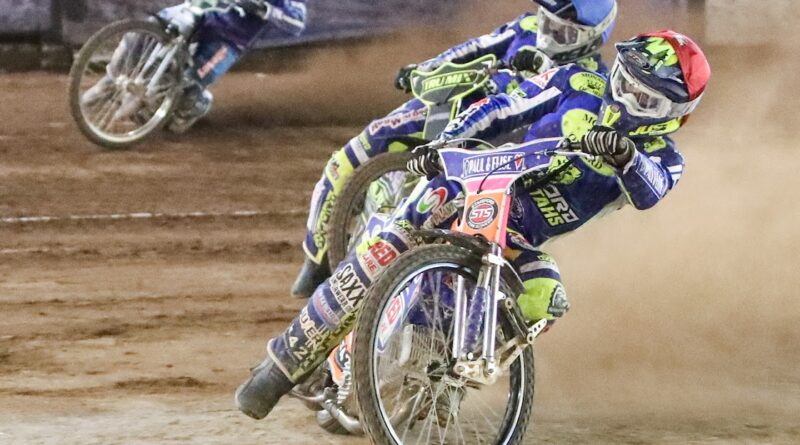 LAST-HEAT HERO Aaron Summers felt Monarch Oxford Cheetahs could not have given any more in the thrilling 45-45 draw with Poole Pirates at Sandy Lane last night (Tuesday).

The result leaves Pirates as firm favourites to win the southern section of the Jubilee Trophy and progress to the final. Cheetahs now need to score 49 points at Wimborne Road tonight (Wednesday) to pick up all four league points to stand any chance of qualifying, while they would also need Pirates to lose at home to Plymouth next week.

The meeting last night went all the way to the final bend of the final race, which was much to the credit of Cheetahs, since skipper Scott Nicholls and Paul Starke were both left feeling somewhat second hand after a nasty first-bend pile-up in the opening race that saw them thud into the air fence.

Pirates edged into an early 11-7 lead, but then a superb from-the-back 5-1 by Troy Batchelor and Dillon Ruml in Heat 4 levelled the scores.

Poole had a 5-1 for almost the whole of Heat 5, before Aaron Summers shot around the outside coming off the final bend and pipped Drew Kemp to second place in photo-finish.

Pirates again pulled four points ahead after seven races, but Ruml and Starke levelled the scores with a 5-1 in Heat 8, after the latter forced a route under Zack Cook.

Cheetahs took the lead for the first time in Heat 10, after both Starke and Nicholls pushed inside Ben Cook, and then Nicholls produced some sublime team-riding to ensure the 5-1.

Poole were far from beaten and led 37-35 after twelve races after a 4-2 and a 5-1. The next two heats were shared, and Oxford needed a 5-1 from the final race to snatch victory, where the odds seemed to favour Pirates since Steve Worrall had 12 points out of 12 heading into this race.

But it was Summers and Batchelor who hit the front. With Summers leading, Batchelor came under all sorts of pressure as Worrall tried to force a route under him, while King rode the outside line. With King, in particular, edging closer and closer, Batchelor tried to block his run on the final lap, but instead King chopped to the inside and gained second place. Batchelor threw everything back at him, but just missed out in a tight finish. With the 4-2 heat advantage, Cheetahs had forced a draw.

Poole provided 10 of the 15 race winners, but Oxford had plenty of strength-in-depth, despite the withdrawal of Jack Thomas, after he aggravated his wrist injury.

Speaking post-meeting, Cheetahs’ top-scorer Aaron Summers said: “We knew it was going to be a tough one against Poole. We were giving it our best, and it was close all night. We were in front, then they were in front, and it went all the way to the final race.

“I made a good gate in the last race, and when I had a look behind me, I could see Troy battling away. One moment he was there, and we had the 5-1 we needed, the next moment Danny (King) was there.

“It never helps when your No 1 takes a knock in Heat 1 and Scott was in a bit of pain for the rest of the night. The same with Paul, he wasn’t quite right while he bent his bike in that opening race.

“I was pretty pleased with my own night. I had a good battle in one race (Heat 5) to make it into second place from behind, and I finished off strongly to win Heat 15. That’s always great win that race, because it’s the top four guys on the night out there together, while it was nice to stop Stevie Worrall’s maximum, because he’d won all his races until then.

“It was a good meeting and we did all we could to win and we took a draw against a Poole side who are having a very good season. We really could have done with a win tonight, but we’ll still go there tomorrow to Poole and do our best to win the meeting there.”

* OXFORD CHARGERS entertain Armadale Devils at Sandy Lane tonight (Wednesday) at 7.30pm. Those with a Summertime Special ticket, which covered both home meetings this week, are advised to bring their ticket back along, while single meeting tickets are still available online at: www.oxfordspeedway.club/tickets. The Kids Go Free promotion continues, with accompanied children under 16 admitted for free.

* MONARCH Oxford Cheetahs are away at Poole tonight in their concluding Jubilee League fixture. Rider replacement will operate for the injured Jack Thomas, but otherwise Cheetahs will be at full strength.