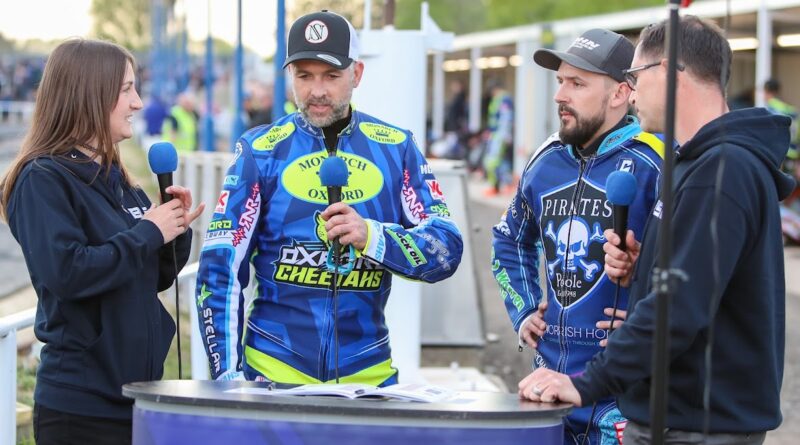 Peter Schroeck is ready to tackle the Monarch Cheetahs’ “biggest test of the season” this week when racing back-to-back fixtures against Poole Pirates in the Jubilee League.

The Cheetahs host Neil Middleditch’s Pirates at Oxford Stadium on Tuesday evening (7.30pm) before travelling to Dorset 24 hours later for the away leg of Cheetahs’ southern group campaign.

Schroeck’s squad must win both remaining fixtures to keep hopes of reaching the Jubilee League Grand Final alive. Pirates currently top the table with a maximum 11 points from their three meetings to date while Cheetahs sit second with nine points out of a possible 14.

Despite slipping to defeats against Poole both on home and away shale earlier this season, Schroeck is in an optimistic mood ahead of tapes-up.

“We have to win both meetings, it’s as simple as that,” said Schroeck. “There are a still plenty of permutations even in our ideal scenario but beating Poole home and away is essential.

“I believe it’s achievable as well. Our squad has come a long way since we last raced the Pirates in April with the additions of Paul (Starke) and Aaron (Summers) who both have invaluable experience.

“It will be a fantastic spectacle for the fans, both teams are in good form and we hope to see another strong crowd trackside which can really help to make the difference. Poole is a speedway town with a proud history and the club is at the heart of its community, so we share a lot of similarities in that sense.

“We can’t afford to let any basic errors slip into our game because we will be punished. Hopefully we can get the job done tonight and take our efforts to quality for the final down to Dorset tomorrow.”

Jack Thomas returns to the squad too after declaring himself fit to race after recovering from two broken wrists while Dillon Ruml has returned from international duty at the Speedway of Nations with Team USA.

Schroeck added: “We’re encouraged by Jack’s recovery and look forward to welcoming him back to the team. Injuries are part and parcel of speedway, but we’ve been hit by a couple of unfortunate knocks this year at untimely moments.

“Dillon (Ruml) is full of energy after his Speedway of Nations appearance too. If we can all click at the same time, then I see no reason why we can’t beat the Pirates by seven or more points.”

Tickets for tonight’s Jubilee League (South) fixture are on sale now and can be purchased by clicking here. Adults are priced £18 and kids go free.