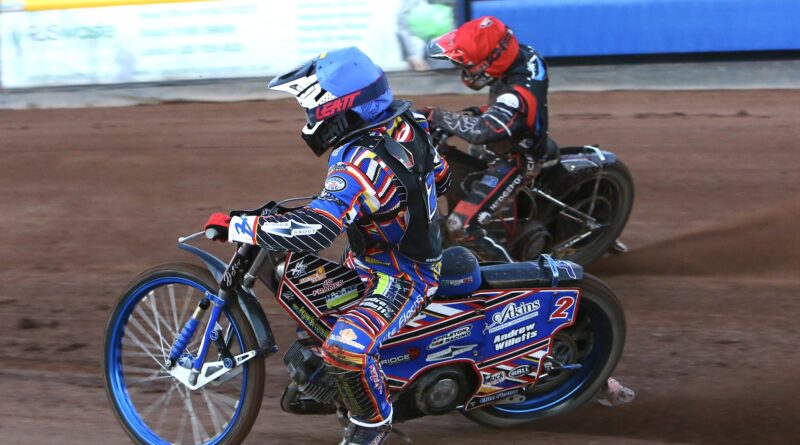 It reduces the gap between the two teams to just two points, with Fen Tigers having a match in hand. The two sides meet again at West Row in Suffolk on Sunday in a clash that now has even more importance.

Chargers, already without the injured duo of Nathan Stoneman and Luke Killeen, were hit by a pre-meeting blow yesterday when Jordan Jenkins pulled out at lunchtime, due to abdominal problems caused by a recent crash at Poole.

Chargers brought in Kent’s Ben Morley as a guest. Morley had previously scored 15 points as a guest for Leicester at Cowley but was a shadow of that rider last night and struggled. In contrast, both Max Clegg (full) and Jason Edwards (paid) scored maximums for Fen Tigers.

The early stages were nip and tuck. Chargers took a 4-2 from Jacob Clouting and Arran Butcher in Heat 2, but Fen Tigers grabbed the lead with a 5-1 in Heat 3.

Heat 7 saw Fen Tigers take a 4-2 to extend their lead to four points, but stand-in skipper Henry Atkins and Clouting, was who enjoying a fine night, levelled the scores at 24-24 with a 5-1 from Heat 8.

But Oxford conceded a 4-2 in Heat 9, when Sam Hagon’s cut-off came out on the final lap, while he was placed for a point.

Chargers took the lead after a 5-1 in Heat 10, a race in which both Atkins and Morley passed Alex Spooner in fine style. Chargers headed into the interval with a 31-29 lead.

That it just wasn’t Chargers night became apparent in Heat 11. Morley hobbled off after a last bend fall while in second place, as Edwards and Sam Woods hit back with a 5-1 as Fen Tigers re-took the lead.

In Heat 12, Mildenhall’s Jack Kingston took his third win race of the evening ahead of Hagon, while Clouting passed Josh Warren for third place in a 3-3.

Heat 13 saw a tapes-to-flag victory for Clegg and Edwards, as Mildenhall stretched their lead to six points. Fen Tigers won the meeting with a 4-2 in Heat 14, with Jody Scott overhauling Josh Warren for second place and closing in on race-leader Spooner on the final lap. 15-year-old Scott completed another sold night’s work with 7+2.

Chargers needed a 4-2 in the final race to prevent Mildenhall from taking the fourth league point. But Clegg and Edwards took another comprehensive 5-1 to complete their maximums.

A telling statistic is that Fen Tigers provided 12 heat-winners, while Chargers provided just three. It’s likely that would have been very different had Jenkins, Stoneman and Killeen been fit.

Speaking post-meeting, team manager Peter Schroeck said: “It was always going to be difficult, from the moment that we knew we were without Jordan ( Jenkins). Jordan is not only a big scorer, but he’s a big influence on the rest of the side.

“Jordan suffered abdominal problems at Poole recently, for which he was signed out of that meeting. It was a racing injury. It flared up in the morning today and there was no way he was going to be fit to ride for us tonight.

“When you’ve got boys like Max Clegg and Jason Edwards riding against you, you need a big hitter to go against them. They’re Championship riders and you need a Championship rider to go up against them. We booked Ben (Morley) as a guest but he didn’t come to the party today. With Jordan, we would have had a rider who could have taken points off Max and Jason and then the whole nature of the meeting changes. When you’ve got a No 1 leading from the front and Jordan can do that, the rest of the boys follow.

“There were still some positives for us. Henry (Atkins) got stuck in as stand-in skipper, while Jody (Scott) was very impressive again from the No 4 spot. Jacob (Clouting) had a good meeting from No 7 as well.

“It was one of those nights when everything seemed to go wrong. Sam (Hagon) lost his cut-off and that lost us a point and Ben was second when he fell off. But don’t get me wrong – Mildenhall were the better team tonight and deserved to win.

“Jordan wants to be racing again at the weekend and we’ll be going to Mildenhall on Sunday with the approach that the pressure is now all on the Fen Tigers to finish the job, now that they’ve won here.”

* THE next action at Sandy Lane is another vital home meeting for Oxford Chargers against the Kent Royals in a fortnight on Wednesday, September 7. Tickets will be on sale soon at www.oxfordspeedway.club/tickets.