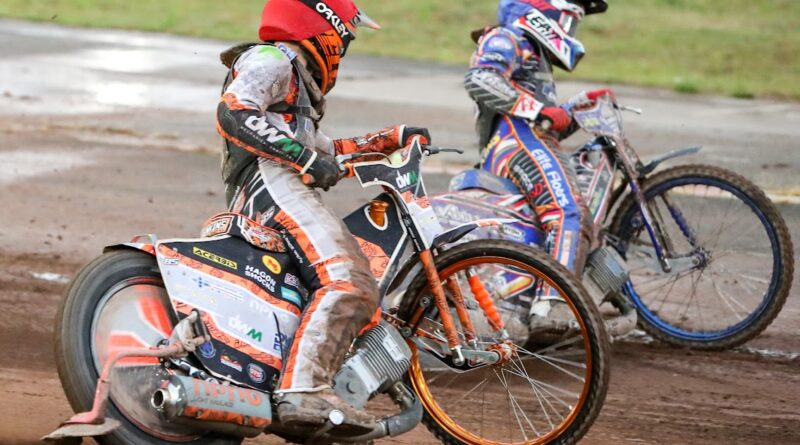 Heavy afternoon rain hit the track at around 5pm and led to the meeting on the still-drying surface starting around 15 minutes late at 7.45pm, after some sterling work by track staff. But the racing was completed in good time by 9pm, while the threat of another further heavy rain shower never came.

In a nip-and-tuck encounter, the two sides traded the lead in the opening races. Oxford skipper Jordan Jenkins suffered an engine failure in Heat 1, which forced him onto his spare bike for the rest of the evening, as Lion Cubs took a 4-2, while Chargers took the lead with a fine 5-1 from Jacob Clouting and Arran Butcher in Heat 2.

Lion Cubs re-took the lead with a 5-1 in Heat 4, but Chargers then took a couple of 4-2s to move back in front and extended their lead to six points, after a 5-1 from Jenkins and Atkins in Heat 10.

Lion Cubs with edged back level with three 4-2s, and Heat 14 looked like a key race. Butcher recovered from mechanical problems in his previous outing to make the start and then rode a perfect four laps to shut out Lion Cubs’ impressive reserve Max Perry. Meanwhile, 15-year-old Jody Scott passed Tom Spencer for third place after a lap, and Spencer then fell trying to hit back, as Chargers moved back ahead with a 4-2.

Chargers were two points in front but faced a challenging Heat 15, featuring Lion Cubs’ unbeaten guest Ben Morley. Morley trapped and completed a 15-point maximum, ahead of Jenkins, while Joe Thompson kept third of Atkins, and Lion Cubs forced a draw with a 4-2.

Both teams gave their all, while there was fine racing on a slightly heavy surface due to the rain, no more so than in Heat 9, when Sam Hagon produced a fabulous outside pass on Thompson after a lap, only for Thompson to repeat the move a lap later.

Henry Atkins, who made his home debut for Chargers and scored 8+1, said: “It went really well. It was a challenge getting the right set-ups for the track, having not raced around here before, while the rain beforehand changed a few things.

“We made a change to the bike during the meeting and it worked well, because I won my third ride (Heat 8) and got the 5-1 with Jordan (Jenkins) in Heat 10. I’m happy with paid nine on my home debut, and I also got used to team-riding with a couple of the boys.

“In Heat 15, I was off gate one and when I’d been off that gate previously with Jordan, we’d taken a 5-1. But the inside gate was a little slicker by that point, and I didn’t get out of the start. But to even get to Heat 15 in my first meeting around here shows that I had a good night.

“Leicester are a strong team, which is why they are top of the league table. We did drop a few points during the night and that cost us the win. Of course, we’d have liked to have won, but at least we got the draw – we’ve got to take that result and move forward from here.

“I can’t see why we can’t pick up a win at Kent when we’re there on Sunday. They’ve got a couple of top boys in their side, but we can take some points off them and then beat the rest of their riders. It’s getting to the point of the season when we need to get some more away points to make sure we get a place in the play-offs. We’ll aim to come away from Kent with a win.”

Atkins also reflected on the weekend, when he won the 250cc class of the British Grasstrack Championship for the fourth time in five years. He said: “It was a good weekend. I had a brand-new bike and frame and it worked lovely – a big thank to Andrew Appleton. In the final, I pulled away and won by quite a margin. It was good and I was happy to win my fourth title.”