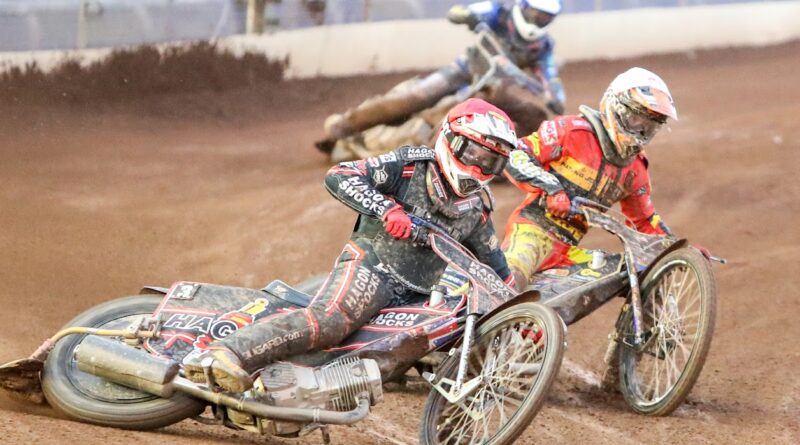 17-year-old Hagon won his opening two outings, and then took two third places, before winning Heat 18 to finish on 11 points.

In the three-man run-off for third place, Hagon made the start and fended off Nathan Ablitt on the opening lap, but Harry McGurk pushed under them both on the fourth bend, and Hagon was pushed wide as Ablitt also passed him. The race was still being fiercely contested, when Ablitt fell on the opening turns of the third lap, just after McGurk had re-passed him for the lead. It was stopped before the start of the final lap, but referee Willie Dishington used his discretion to award the race, which was tough luck on Hagon, who wasn’t that far behind McGurk at the time of the stoppage.

15-year-old Scott started his evening with a sharp get-away in Heat 2, but the race was stopped, and he was warned for moving at the start. In the re-run, the tapes were held for a long time and eventually Scott touched them and picked up a controversial exclusion.

After a third place in his next outing, he won Heat 11, before picking up a couple of second places to finish on a total of eight points.

Berwick’s Leon Flint was a deserving winner of the meeting scoring a 15-point maximum, after beating Belle Vue’s Jack Mulford in a Heat 19 showdown for the title.

Hagon has one more opportunity to win the meeting next year, while Scott has no fewer than another four chances.

Both Hagon and Scott ride for Chargers in their away clash at Iwade, near Sittingbourne, against Kent Kings on Sunday at 12 noon.