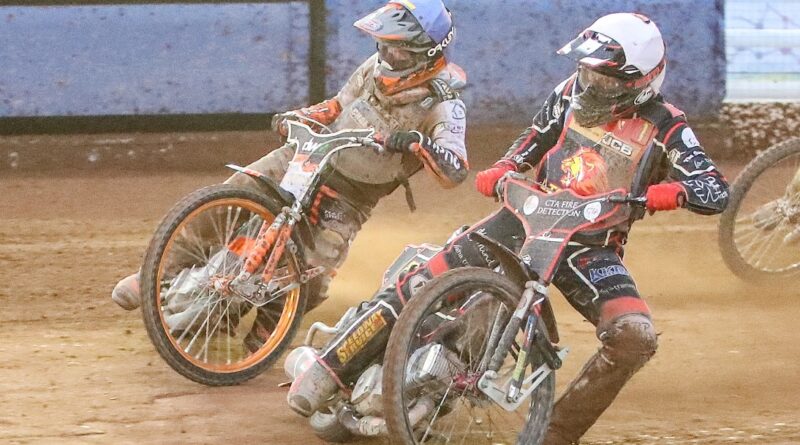 Oxford Chargers were held to a tense draw in the National Development League at Oxford Stadium on Wednesday night against table topping Leicester Lion Cubs.

Led by guest Ben Morley – who registered a full 15-point maximum – the Lion Cubs snatched a draw in a dramatic last-heat decider by confirming a 4-2 over home pair Jordan Jenkins and Henry Atkins.

The meeting was closely contested with neither side able to establish a lead greater than six points at any moment.

Jason Crump’s Chargers looked to be on course to deny Cubs any points when a timely 5-1 in Heat 10 put the hosts 33-27 ahead with five races remaining.

But four 4-2s in favour of Leicester restricted Chargers to a draw – a result which lifted Oxford’s newest professional sports team into the play-off frame.

Henry Atkins, who made his home debut for Chargers, said: “It went really well. It was a challenge getting the right set-ups for the track, having not raced around here before, while the rain beforehand changed a few things.

“We made a change to the bike during the meeting and it worked well. I’m happy with paid nine on my home debut, and I also got used to team-riding with a couple of the boys.”

Chargers resume their National League campaign away to Kent on Sunday afternoon. Tapes-up are at midday.

The Brummies never led the meeting until Heat 14 when an unlikely 5-1 courtesy of Alfie Bowtell and Ashley Morris put the hosts 43-41 ahead with one heat remaining.

Requiring a 5-1 to win on the night, Monarch Cheetahs pair Troy Batchelor and Scott Nicholls could only manage a 3-3. It means the Monarch Cheetahs sit second in the Jubilee League South table with two fixtures raced.

Cheetahs return to action next week with a double header against Plymouth in the Jubilee League. They race at the Plymouth Coliseum on Tuesday night before returning to Oxford Stadium 24 hours later.