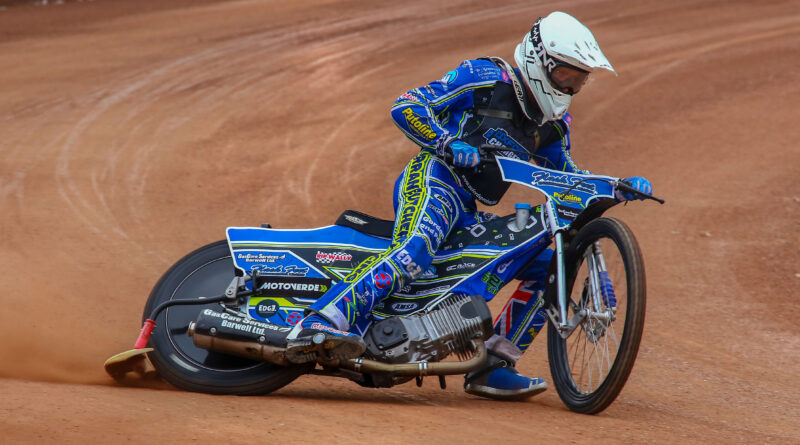 The Monarch Oxford Cheetahs made the perfect start to their Jubilee League campaign at Oxford Stadium on Tuesday night, beating Birmingham Brummies 56-34.

Heat leading trio Scott Nicholls, Aaron Summers and Troy Batchelor all posted double-figure returns while Cameron Heeps and Jordan Jenkins chipped in by registering race wins of their own.

Californian Dillon Ruml is quickly establishing himself as a fans’ favourite. The American youngster returned with 5+3 from five rides and was unfortunate not to add more points following a spectacular off in his fourth ride while comfortably holding third after passing Stefan Nielsen.

The Monarch Cheetahs continue their Jubilee League campaign away to Birmingham tonight (Wednesday) at Perry Barr Stadium. Tapes-up are at 7.30pm.

Meanwhile, Oxford Chargers reserve Arran Butcher believes a busy schedule is helping him to unlock his true potential this season ahead of Leicester Lion Cubs’ visit to Oxford Stadium tonight.

Leicestershire-based Butcher has been a consistent points scorer for the Chargers in their inaugural season, posting 35 points from as many rides and an additional seven bonus points.

Tonight signals the beginning of a busy period for the 21-year-old.

He travels to the Isle of Wight on Thursday evening to compete in Round Two of the Island Masters before riding in the European Individual Grass Track Championship semi-final in Germany on Saturday.

Butcher returns to the UK on Sunday for Chargers’ trip to Kent in the National Development League.

“It’s vital to be busy,” said Butcher. “If you get stuck in the rut of not riding regularly it’s difficult to take your development to that next level.

“In previous seasons where I haven’t raced as much, I’d feel good on the bike one week and then be without a session for a long period of time. I’m trying to get out on track at least three times each week.

“When you have fun and enjoy what you do, it can give you that confidence required to perform well on a speedway bike. It doesn’t matter if it’s National League, second halves or on my grass track bike, I’ll take any time I can.”

The Chargers are unbeaten at home this season having posted 50-39 victories over Berwick Bullets and Plymouth Centurions respectively.

Butcher believes maintaining that 100%-win record will go a long way in helping him and his teammates secure a top four play-off spot.

“I believe home results will decide who makes the play-offs and who falls just short,” said Butcher. “We pushed Berwick and Leicester hard away from home, which is encouraging and shows we’re a very capable team.

“Leicester boast a very strong side and can be quite ruthless in the second half of the meeting. We’re fired up and looking forward to it.

“Oxford is a fair racing track and I do believe riders can adapt quickly when they travel here. It’s not a venue where you’re constantly chasing the setup, so as the home team we do have to work that bit harder.

“But it’s made for some outstanding racing which is what everyone wants to see.”

Tickets for tonight’s National Development League fixture between Oxford Chargers and Leicester Lion Cubs are on sale now and can be purchased by clicking here. Tapes-up at Oxford Stadium is at 7.30pm.