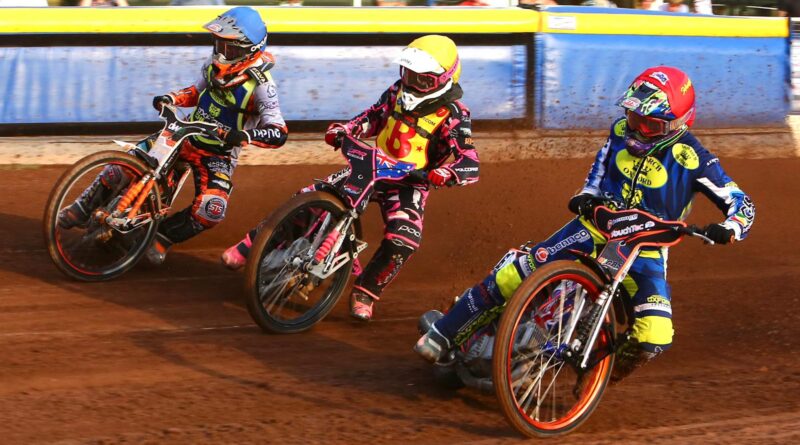 It was a meeting where Cheetahs were in complete control from early on. They registered back-to-back 5-1s in Heats 2 and 3 and by the end of Heat 7, they were already 29-13 ahead.

Victory was in the bag with three races remaining, and Cheetahs finished with a further flourish with three heat advantages.

Troy Batchelor top-scored for Cheetahs with 13 points and was unbeaten heading into Heat 15, where he finished third to Nicholls and Brummies’ impressive guest Tom Brennan. But everyone Oxford rider scored well and contributed towards the victory.

Jordan Jenkins put in a great performance at reserve. The skipper of the Oxford Chargers will be hoping to show the same form when he leads Chargers against National League leaders Leicester Lion Cubs at Cowley tonight (7.30pm).

Despite taking place on the evening of the hottest day in the UK for many, many years, the track stood up remarkably well, with Nicholls, Jenkins, Dillon Ruml and Cameron Heeps all amongst those who produced fine overtakes during the evening.

Perhaps the best race of the lot occurred in Heat 6, when Ruml flew around both Justin Sedgmen and Jason Edwards during a breath-taking four laps. There were also some fine battles between Jenkins and Edwards, who are also team-mates at Redcar.

The start of the meeting was delayed by a brief rain shower.

Scott Nicholls said: “It was a good, solid performance from the team. You could argue Birmingham are not the strongest side out there, but they’ve got some riders who can trap really well, and they won here in the league and they cannot afford to be taken lightly.

“It was a good all-around performance. We put in the effort, everyone gave 100%, and we got a great win and that’s all you can ask for.

“It has given us a bit of confidence for the rest of this competition. We’ll concentrate on one meeting at a time. Firstly, we need to make sure that we also win up at Birmingham. After that, we’ll focus on the meetings against Plymouth next week.

“It would be great to win the Jubilee League. When we’re all firing, we’ve got a team that can take it all the way.”

* OXFORD CHARGERS entertain league leaders Leicester Lion Cubs at Sandy Lane tonight (Wednesday) at 7.30pm. Those with a Summertime Special ticket, which covered both home meetings this week, are advised to bring their ticket back along, while single meeting tickets are still available online at: www.oxfordspeedway.club/tickets. The Kids Go Free promotion continues, with accompanied children under 16 admitted for free.

* MONARCH Oxford Cheetahs are away at Birmingham tonight and will be hoping to complete a quick double. Jack Thomas returns from two broken wrists, while rider replacement will still operate for Paul Starke. The re-introduction of Thomas, in place of the injured Josh Macdonald, pushes Dillon Ruml back down to reserve, alongside Cameron Heeps.