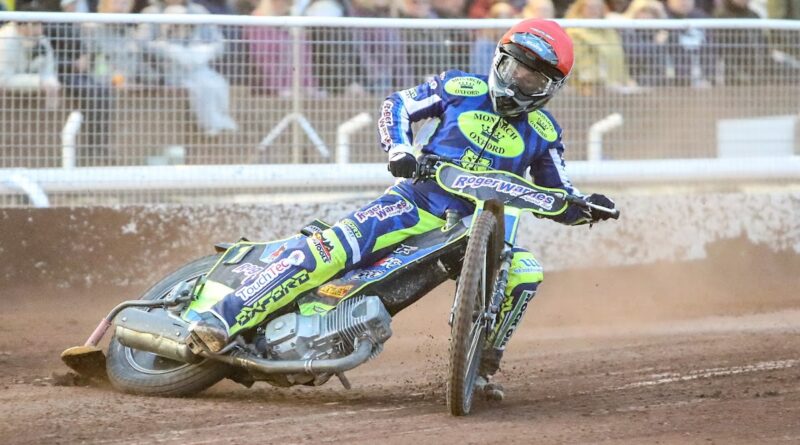 MONARCH Oxford Cheetahs ended up with a well-deserved point to show for their efforts at Edinburgh’s Armadale Stadium on Friday evening. Edinburgh Monarchs eventually won 48-42, although it was Cheetahs who led who for much of the night.

With Scott Nicholls injured, Ricky Wells was the planned guest, but he was forced to withdraw and Berwick’s Leon Flint took an 11th hour booking in his place. Cheetahs also continued to use rider replacement for Kyle Newman, and Luke Killeen again stepped in to the replace the injured Josh Macdonald.

Cheetahs took the lead with a 4-2 from Aaron Summers and Cameron Heeps in Heat 3, after Summers won a battle for the lead for Paco Castagna, and that lead became six points after a 5-1 from Flint and Heeps in Heat 5.

Cheetahs still led by 23-19 going into Heat 8, where Heeps and Ruml held a 5-1 for the majority of the race. In an exciting finish, Castagna burst through the middle of the Oxford riders on the final bend and caught Ruml and nearly Heeps too, but the 4-2 still extended Cheetahs’ lead back to six points.

Stand-in skipper Troy Batchelor was warned for moving at the start for a second time in Heat 9, leading to a 15-metre penalty, and Edinburgh clawed back a 5-1, before Monarchs levelled the scores with a 4-2 in Heat 11.

Heat 12 was a talking point. Summers had bike problems before the race. Batchelor came out of the pits with a spare bike, and Summers seemed to be make it with seconds to spare. Under British Speedway racing rules, the rider has to be heading in the direction of the tapes, and Summers was doing just that, but the red lights came on and the Australian was excluded. There was then confusion, due to the pits telephone not working, with the result that Summers’ replacement Luke Killeen was then also excluded for two minutes and Cheetahs went into the race with just one rider.

When the race eventually took place, Ruml passed Jacob Hook for second place, to restrict Monarchs to a 4-2, but the home side still took the lead for the first time at 37-35.

Batchelor and Flint were first away in Heat 13, but Josh Pickering and Sam Masters produced some terrific passing moves as they came through and took a 5-1 for Monarchs.

Suddenly, Oxford suddenly seemed under threat of taking nothing away from the meeting, but Summers and Ruml made no mistakes with a 5-1 over Hook and Castagna in Heat 14. That 5-1 ensured Cheetahs would pick up at least a point.

With Monarchs 43-41 ahead going into the final race, Masters showed first, while Pickering moved inside Batchelor, as the 5-1 clinched victory for the home side and Masters and Pickering completed paid maximums.

Cheetahs did an excellent job in containing the lesser lights of Monarchs, and could have ended with a draw or even a win but for the exclusions in Heat 9 and Heat 12. Ruml ended with a 13+2 return from seven rides – his best score to date in British Speedway.

Dillon Ruml said: “I’m pretty sure paid 15 is my best score while riding over here. I’ve had some guest bookings at Edinburgh, so it’s nice to finally come here with Oxford and score some good points from my team.

“It’s unfortunate we lost the match, but we deserved the point that we got. I guess you can look at the race (Heat 8) where I just made a mistake towards the end and Paco come through and took a point off me. That should have been a 5-1. But then you enter the realm of ‘what ifs’, when maybe it’s best to focus on the positives. I’m finding my form, improving quite a bit and I’m happy with that.”

Team manager Peter Schroeck said: “The boys gave it everything and got stuck in. It would have been gutting to go home without a point, so I’m glad that we got that. But, at the same time, I was a bit disappointed, because we maybe deserved even more.

“There was a couple of decisions that went against us. I felt Aaron’s exclusion from Heat 12 was harsh, because he seemed to be already heading to the tapes when the two minutes ran out. But what was more annoying was what followed, when I was unable to get through to the referee. I was told by the Clerk Of The Course that the pit telephone was not working, but I don’t think that’s good enough in a professional sport. The promoter then told me that it would be fixed for next week, but that’s not a lot of good for us – we’re not back here next week!

“Sam Masters and Josh Pickering are so good around the track, and that made Heat 13 and Heat 15 so tough. We could have done with Scott (Nicholls) because here’s a bit of a track specialist around here, although I’m certainly not complaining about the effort put in by Leon Flint, who came in and gave it his all. I could easily put Leon in Heat 15, but decided to go with the experience with Aaron and Troy.

“But I’m really happy with efforts put in by the riders. Dillon was great from reserve, scoring a lot of points, and all the boys could not be faulted for effort, including young Luke Killeen at number 7.”