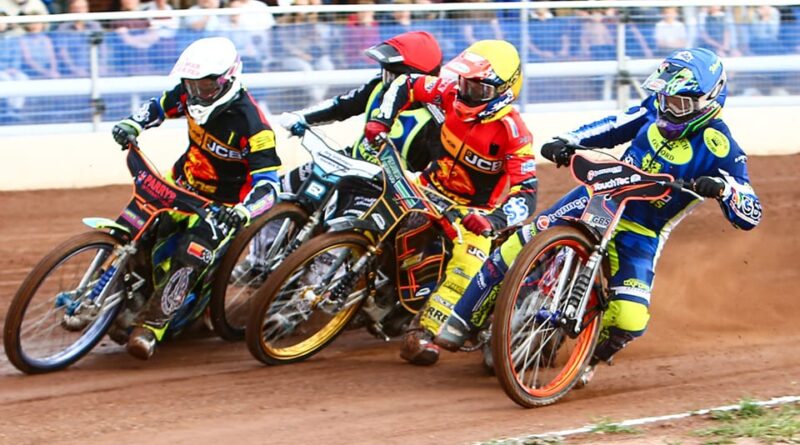 It was all level at 42-42 entering the final race, but the Leicester pair of Nick Morris and Richie Worrall hit the front from the tapes and stand-in skipper Troy Batchelor gave it his all, but he could not budge Worrall from second place.

For the second week in succession, following last week’s thrilling 46-44 victory over Glasgow, it was an extremely close-fought meeting.

There were no more than two points separating the two teams during the first 14 races. Three times, Cheetahs edged in front with a 4-2, but Lions twice levelled the scores and then the visitors took the lead with a 5-1 in Heat 12.

In Heat 13, the previously unbeaten Batchelor was excluded for moving at the start for a second time during the evening. Guest Erik Riss, in for the injured Scott Nicholls, picked up an excellent victory over Morris and Kyle Howarth, while Dillon Ruml took a reserve ride for the excluded Batchelor and finished fourth, but not before he had battled past Howarth at one stage.

Ruml was back out in Heat 14 and produced an excellent pass on Jason Edwards to win the race, and Aaron Summers finished third as Cheetahs scored a 4-2 and clawed it back level with just one race to go.

Oxford saw a few points slip through their fingers during the night – some of their own making, some not. Cameron Heeps fell on the final lap of Heat 8 while in second place and chasing race-leader Dan Thompson. Heeps recovered to take an excellent race win over Worrall in Heat 10.

Slightly more controversially, Ruml fell and was excluded in Heat 11, despite appearing to have more than a helping hand from Connor Mountain. It happened up the back straight and into the third bend where the referee does not have a clear view, but those on the back straight were in no doubt that Ruml had been knocked off.

New Oxford signing Paul Starke, in his first-ever competitive rides on the reshaped Sandy Lane circuit, scored 3+1 and looked on the pace. He’s a quality rider and it won’t be long until he is scoring good points for Cheetahs.

Riss got up from a nasty looking tumble in Heat 1, after there was contact going into the first bend. Both Riss and Heeps passed Mountain in the re-run to salvage an opening 3-3.

Meanwhile, Oxford Chargers’ skipper Jordan Jenkins, guesting for the injured Josh Macdonald put in a good account of himself and led Worrall for almost the whole of Heat 7, before his opponent passed him on the final lap to deny Cheetahs a 5-1.

But all-in-all, this was another excellent meeting in front of another bumper Cowley crowd, with the Cheetahs taking a very strong Leicester side – that had already won at Poole this season – all the way to a last-heat decider.

Oxford Cheetahs are back in action at Sandy Lane next Wednesday (July 6), when they host fourth-placed Plymouth Gladiators in what is bound to be another great contest.

👉 Don't miss out on a blockbuster night of speedway at @Oxford_Stadium - gates open in just 2⃣ hours!