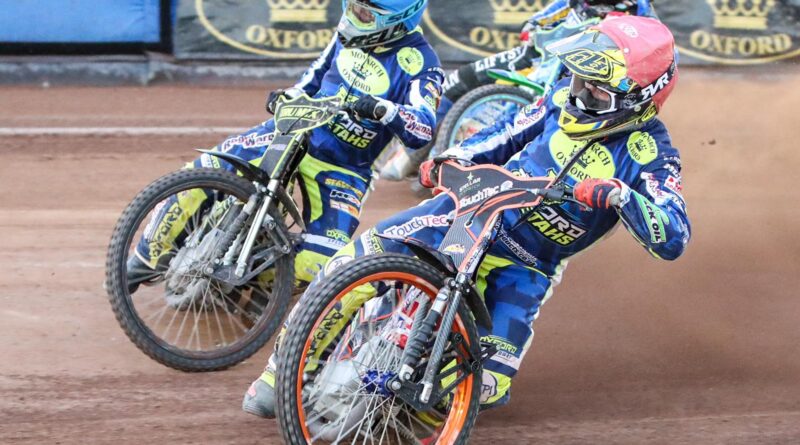 MONARCH Oxford Cheetahs bounced back to winning ways with a tremendous 50-40 victory over in-form Plymouth Gladiators on a night of some superb speedway at Sandy Lane last night (Wednesday).

Plymouth are fourth in the Championship and are aiming for a top two position before the end of the season and this was only the third time in 13 Championship clashes that they came out of the meeting without a league point. Meanwhile, Cheetahs kept alive their mathematical chances of reaching the play-offs with this victory.

It was Gladiators who took the lead with a 4-2 in Heat 1, and they maintained their narrow lead after a run of four successive 3-3 drawn races.

Cheetahs took the lead with a 5-1 in Heat 6, after skipper Scott Nicholls – on his return from injury – and Dillon Ruml took advantage of a mistake by Hans Andersen, who lifted alarmingly on the second turn.

In Heat 7, Plymouth guest Danny King hit the tapes and was penalised 15 metres as Cheetahs moved further ahead with a 4-2, as Troy Batchelor won his second successive race.

Heat 8 provided four laps of pulsating action. While Cameron Heeps was taking his second heat win of the evening, Ruml was involved in a battle royal for the minor placings with Alfie Bowtell and Ben Morley. Just when it looked like the race would finish as a 3-3, Ruml produced a final burst around the outside to pip Morley to the line to grab third, as Cheetahs took a third successive heat advantage.

Plymouth’s Ben Barker had won his opening two races and was introduced into Heat 9 as a tactical substitute, but he was thwarted by Aaron Summers, who pushed in front on the second bend and led home Hans Andersen and Barker.

Heat 10 was another terrific race. King edged around Nicholls on the opening lap and started to chase down Ruml. But Nicholls was far from beaten and tried a variety of lines, before finally blasting around King on the back straight of the final lap to join Ruml for a 5-1.

That left Cheetahs 35-25 ahead and the next two races were shared as Cheetahs closed in on victory. That was secured in Heat 13, as Nicholls and Batchelor took a 4-2, with Nicholls fending off a challenge from Barker.

A 5-1 to Gladiators in Heat 14 left them in with a chance of a league point if they could take a heat advantage from Heat 15. But Nicholls won a ding-dong battle with King, with numerous changes of position as they battled for the lead, as Cheetahs finished with a 4-2.

Skipper Scott Nicholls dropped just a single point to Barker in Heat 1 and top-scored for Cheetahs with 13+1. He said: “This was a great result for us, because Plymouth are a strong team. It was a really good contest and the boys did well. Plymouth pushed us hard, but we got the win.

“We have had a lot of close meetings around here this year. It’s good for the fans when the meetings go down to the last heat, but for the riders, it is nicer when we can wrap it up with a couple of races to go like we did tonight and the last heat is just about getting a few more points on the board.

“We’ve had a bit of bad luck and some things go against us, but we’ve shown tonight what we can do. Once Starkey (Paul Starke) and Jack (Thomas) are back, we’ll have a team that can go and win anywhere.

“I’m pleased with my score, but in some ways, it was a frustrating night. I seized my first engine after my second ride and had to jump on the other bike and then had some problems with the chains on that. It was a struggle mechanically, but I scored the points and the team got the win, so that’s the main thing.”

Monarch Oxford Cheetahs are back in action next Wednesday (July 13) at Cowley, when they entertain the Berwick Bandits. In the meantime, the Oxford Chargers are in National League action at Leicester on Saturday evening.