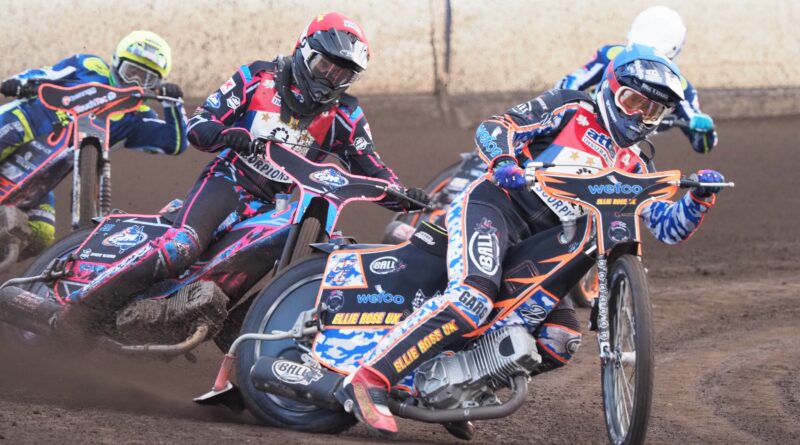 MONARCH Oxford Cheetahs were involved in a cracking speedway meeting for the second time in three days, but they ended up with a 36-54 defeat at Scunthorpe’s Eddie Wright Raceway on Friday evening, writes Rob Peasley.

Just as with Cheetahs’ thrilling 47-43 victory over Redcar on Wednesday, it was a meeting that contained some racing that had to be seen to be believed.

Scunthorpe took firm control with a 4-2 and then two 5-1s in the opening three races. They had won the meeting with three races remaining, while Scorpions’ Simon Lambert scored his first-ever full maximum at second-tier level.

Chris Harris, again guesting for Cheetahs in place of the injured Troy Batchelor, and skipper Scott Nicholls did the bulk of Cheetahs’ scoring, posting 12 and 11+1 respectively.

But the points scored by the rest of the Oxford side did not reflect their efforts. As an example, Nathan Stoneman burst from third to first in the early stages of Heat 8. He was then involved in a great battle with Lambert, which the Scunthorpe skipper won, while Jordan Palin pounced on a small mistake by Stoneman on the final lap to pinch second place. The Oxford rider certainly deserved far more than a point after four exciting laps.

Jack Thomas put in a sterling effort to stop Lambert’s unbeaten run in Heat 12, and he led the race until the back straight of the final lap, until the far greater experience of his opponent around the circuit told.

Cheetahs continued to battle right until the final race, where Harris burst from third to first, and then Nicholls just missed out in the battle for second place, after a ruthless final bend from Zaine Kennedy.

Oxford skipper Scott Nicholls said: “It would have been nice to pick up league points at Scunthorpe, but it didn’t happen. We really believed we could take something from the meeting. But the Scunthorpe riders rode their track very well, they were the better team on the night and deserved the points.”