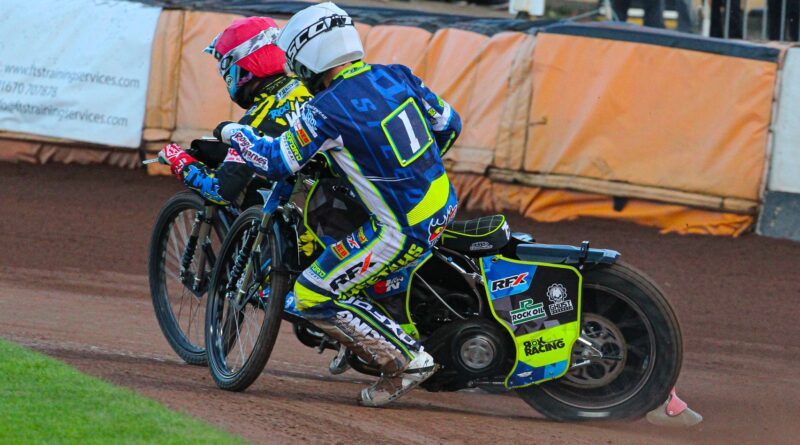 It was a tough night for Oxford Cheetahs at Berwick on Saturday as they lost 31-59 – with the consolation that Cheetahs did improve in the second half of the meeting, writes Rob Peasley.

After seven races the score-line stood at 31-11. Even when Cheetahs had trapped in the early stages, they had been passed by Bandits.

Nathan Stoneman, who had visited Shielfield Park two weeks earlier with the Oxford Chargers, became Cheetahs’ first heat winner in Heat 8, after holding out a challenge from Ty Proctor. Team-mate Dillon Ruml had been holding third until an engine failure, while Stoneman’s victory seemed to inspire his team-mates.

Troy Batchelor, in as a tactical substitute, and Scott Nicholls took a 5-1 from Heat 9, as Cheetahs made the score-line a little more respectable. In the latter stages, even in the races that went the way of Bandits, Cheetahs were right in the battle.

Stoneman put in another big effort in Heat 11, but eventually Jye Etheridge’s greater experience around the track proved too much, while Jack Thomas put machinery problems behind him to fly around Theo Pijper in Heat 12, only for the Dutchman to retake the lead on the next lap.

Cheetahs were unfortunate when race-leader Batchelor suffered a puncture in Heat 13. He lost the lead to a charging Chris Harris and then slowed further and dropped to fourth just as the chequered flag was in sight.

With Harris left on the startline in Heat 15, Nicholls picked up a consolation victory, as Cheetahs finished the evening with a 4-2. Etheridge scored a paid maximum for Bandits.

Speaking post-meeting joint team boss Peter Schroeck said: “It was disappointing. We got all the lads together mid-meeting, and after that they did turn it around and show more spirit.

“We told them that the last thing we thing we want to do is embarrass ourselves, and I think we managed to avoid doing that in the end.

“We we’ve got another important meeting at Newcastle coming up, so we wanted the riders to at least finish on a high today and a couple of them did that, so that’s something, and hopefully we can carry that into Newcastle.

“Nathan Stoneman deserved each ride we gave him. Whether he won a race or came last, he was really out there fighting and that’s all you can ask for.”

Who’s excited to see Scotty back on track tonight!🤩

🎟 Purchase your ticket online 🎟
Kids go free with a paying adult!🎉
http://oxfordspeedway.club/tickets
◾️E-Tickets ONLY, no pay on the gate◾️