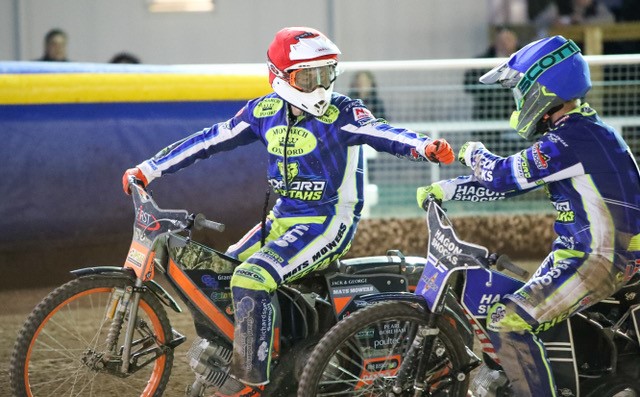 The Monarch Cheetahs slipped to a six-point defeat to defending British Speedway Championship winners Poole Pirates in front of another sell-out home crowd at Oxford Stadium on Wednesday.

Crump’s men reversed a six-point deficit into a two-point advantage courtesy of three successive mid-meeting race advantages. But Pirates’ strength at the top told when 5-1s in heats 11 and 14 earned the visitors a 42-48 win.

Despite the result, Crump is encouraged by the atmosphere in the Monarch Cheetahs’ camp ahead of back-to-back meetings in the north against Berwick on Saturday and then Newcastle Diamonds 24 hours later.

“We’ve already been to Berwick this season with the Chargers, it was good to get a look at the track then,” said Crump. “It’s a challenging track, but hopefully the boys will rise to the challenge.

“In my opinion, we should target coming away with some points from this weekend’s fixtures. We’ll travel north high on confidence despite Wednesday’s result.”

With a long season ahead, there is certainly time for development in the team and Crump is encouraged by what the Monarch Cheetahs’ younger riders have done so far.

“Jack (Thomas) is still young, as is Dillon (Ruml) – they have long careers in front of them,” said Crump.

“It’s great to see them progressing at the rate they have, and let’s hope it continues because we need every rider in the team to contribute to their maximum ability every time.

“It was great to see so many supporters trackside on Wednesday, we really appreciate their support. We hope they keep coming and keep enjoying their speedway.”

Berwick enter the meeting full of confidence, with two wins out of three under their belts so far.

Tapes up for heat one of Saturday’s fixture is at 7:00pm. Tickets are still available.

Tickets for Redcar Bears’ visit to Oxford Stadium on Wednesday, April 27, are on sale now and can be purchased by clicking here.

Who’s excited to see Scotty back on track tonight!🤩

🎟 Purchase your ticket online 🎟
Kids go free with a paying adult!🎉
http://oxfordspeedway.club/tickets
◾️E-Tickets ONLY, no pay on the gate◾️