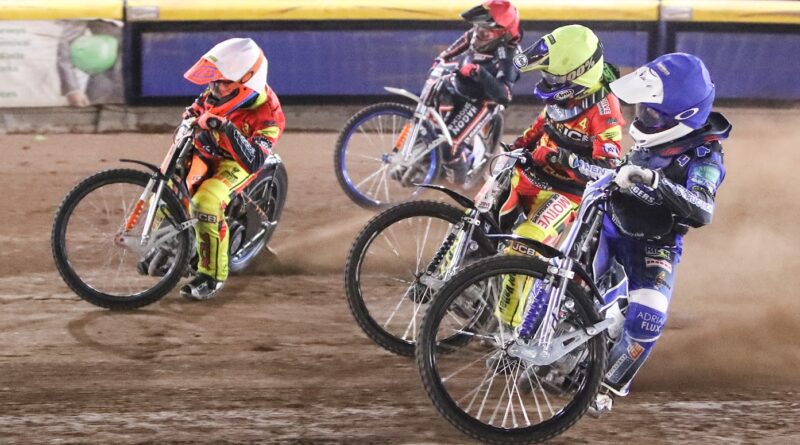 The Chargers take a two-point lead to Beaumont Park for this weekend’s National League play-off tie after winning the first leg at Oxford Stadium on Wednesday night 46-44.

Leicester are unbeaten at home this season and have won all fixtures by at least nine points, including a 51-39 triumph over Chargers back in July.

After clinching a play-off spot on the eve of the third tier’s cut-off date thanks to Colts’ surprise loss at Armadale, Schroeck stated his riders enter Saturday’s tie under no pressure.

The 56-year-old knows the same cannot be said for the home side, who will be expected to reach the Grand Final by maintaining their impressive home form.

“All the pressure is on Leicester, there’s no doubt in my mind about that,” said Schroeck. “We entered the semi-finals as underdogs against a team with the strongest record this season and have nothing to lose.

“We saw what happened to Belle Vue when the pressure got too much last week, they lost heavily to Armadale who had won one meeting all season when all they had to do was keep the score close.

“We benefitted from that to reach the play-offs, so we’re adopting the same strategy this weekend. On paper, we needed to take more than a two-point lead from our home leg.

“But this is speedway, and we have team packed with quality. A good start is essential, if we can achieve that then there’s no reason why we can’t take it down to the wire and progress.”

Chargers were dealt a blow on Thursday when it was confirmed Sam Hagon suffered two broken fingers and sustained ligament damage in his hand from a crash in Heat 15 during the first leg.

Schroeck has moved quickly to book Adam Roynon as a guest for Hagon while Ashton Boughen will again guest at reserve with rider replacement operated for Nathan Stoneman.

The Chargers boss backed his team to take the meeting down to the wire on Leicester’s technical circuit.

“It’s a tricky track to master, and perhaps why Leicester have been so strong at home all year in the Championship and National League,” said Schroeck. “The club is unbeaten in all 16 home league fixtures, but records are there to be broken and we’ve got a team determined to reach the Grand Final.

“The corners are wide and tight while the straights are long, so keeping your wheels in line to get a good exit off turns two and four can be difficult. It’s unlike Oxford in that sense where you are almost constantly turning due to the bowl-like nature of our track.

“This is our biggest meeting of the year and we’re not ready for our regeneration campaign to end just yet. Hopefully we can deliver the goods and progress to the final.”