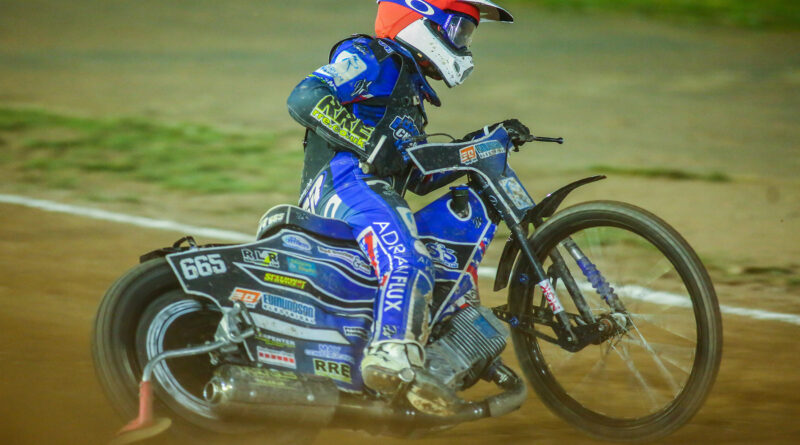 THE Oxford Chargers trio of Henry Atkins, Sam Hagon and Jody Scott all had their moments in the British Under-21 Final at Birmingham last night (Wednesday).

A fourth Charger, skipper Jordan Jenkins, withdrew at lunchtime on the day of the meeting, due to the abdominal issues that ruled him out of both clashes with Mildenhall last week.

Berwick’s Leon Flint was a deserving champion. On an eventful evening, he scored a 15-point-maximum in the heats and also took the winner-takes-all final, after defending champion Tom Brennan, riding with a broken rib, fell chasing Flint in the initial staging of the race.

Atkins was the most impressive of the riders not currently riding at Championship level. The Devonian scored eight points and looked right on the pace. He battled for points all night and scored consistently across all his rides. He missed the cut for the semi-finals by a single point.

Atkins started with a third in Heat 2, having briefly led defending champion Brennan during the race. In a mega-tough Heat 6, he passed highly-fancied Jason Edwards for another third-placed finish.

For 17-year-old Hagon and 15-year-old Scott, the meeting was all about experience against more seasoned competitors, and they scored 5 and 3 points respectively.

Hagon was brought down on the final bend of Heat 9, after wild man Vinnie Foord ploughed into him. Foord was excluded, while Hagon was okay to continue in the meeting.

Scott put in a very impressive race in Heat 16. Both Ace Pijper and Atkins had already passed Kemp, before Kemp drifted wide on the second lap and Scott pounced and moved into third. He then rode a sensible line and there was no way back for highly-fancied Kemp, the runner-up in the competition in 2021.

The final finished just in time at 10pm, the curfew time at Birmingham.

* THE next action at Oxford Stadium is a vital home meeting for Chargers against the Kent Royals next Wednesday (September 7). A victory will see Chargers move back into fourth place ahead of Belle Vue in the battle for the final play-off spot. Tickets are on sale at www.oxfordspeedway.club/tickets