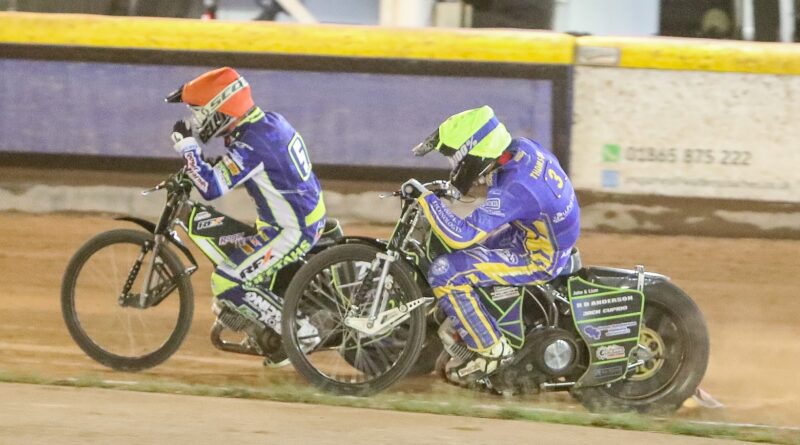 TEAM MANAGER Peter Schroeck looked at the bigger picture, after Monarch Oxford Cheetahs were caught in the closing stages of their final Championship league meeting at Sandy Lane last night (Wednesday). Visitors Edinburgh Monarchs snatched a 46-44 victory after leading only once – at the conclusion of Heat 15.

Cheetahs built up an early 10-point lead after five races and still led 37-29 with just four races to go. But inspired by the brilliant Josh Pickering, Monarchs overturned the deficit in the final four races.

Oxford looked set to commence their evening with a 5-1 from skipper Scott Nicholls and Paul Starke, but Starke suffered an engine failure and Cheetahs had to settle for a 3-3.

Cameron Heeps won Heat 2, while partner Dillon Ruml fought his way around James Sarjeant after a lap, only for the Monarch to regain the position, as Cheetahs took a 4-2.

Heeps was back out in Heat 3 and flew around Thomsen early to join Aaron Summers for a 5-1. Troy Batchelor produced a moment of magic in Heat 4, bursting around both Pickering and Jacob Hook down the back straight, to start his evening with a victory and ensure the race ended as a 3-3.

Summers produced a ride out of the top drawer in Heat 5. After passing both Kyle Howarth and Lasse Fredriksen on the opening lap, the Australian team rode with perfection with Ruml to shut out Howarth, as Cheetahs moved 20-10 ahead with a 5-1.

The next two races were shared, before Monarchs took a 4-2 in Heat 8, after Fredriksen burst around Ruml to win the race.

Heeps was excluded from Heat 9 for touching the tapes and replaced by Ruml. The re-run saw Pickering blast around Summers after a lap in a 3-3. Nicholls shot around Paco Castagna in a similar place in Heat 10, as the two teams remained eight points apart.

Batchelor maintained his unbeaten run in Heat 11, while Monarchs introduced Pickering as a tactical substitute in Heat 12. He pushed inside Starke early on and then joined Kye Thomsen for a 5-1 that reduced the gap to four points.

Heat 13 was the pivotal race of the night. After an unsatisfactory start, it was Cheetahs who emerged out of the gate in the re-run and a 5-1 would have put the match almost beyond Monarchs’ reach. But Pickering shot around Nicholls on the back straight of the second lap into second place and then Nicholls, now third, fell on the fourth bend of the same lap, remounting at the back behind Howarth. Pickering chased down Batchelor and charged around him on the back straight of the final lap. The 4-2 to Monarchs reduced the gap to just two points.

Heat 14 was a further blow for Cheetahs. Castagna made the start and resisted all of Summers’ efforts to find a way through. Meanwhile, Hook passed Ruml at the end of the opening lap and then held onto third place, as Monarchs levelled the scores with a 4-2.

Pickering and Thomsen made the start in the decisive Heat 15. Batchelor battled past Thomsen with a lap to go, but Nicholls ran out of time in his pursuit of Thomsen, and Monarchs clinched the meeting with their fourth successive heat advantage.

Batchelor (13) and Summers (10) led the scoring for Cheetahs, while Pickering scored a brilliant 17 points for Monarchs. The result confirms that Oxford will finish in ninth place in the league, ahead of Birmingham.

Team manager Peter Schroeck was reflective after the meeting, looking at the bigger picture, after the return of the Oxford Cheetahs, on track for the first time at Sandy Lane since 2007, in front of big crowds.

Schroeck said: “You have to pinch yourself a little bit and realise everything that’s been achieved this year, with the return of speedway to the stadium after a 15-year absence.

“Of course, we wanted to do better on-track with the Cheetahs this season, but it was never meant to be. We’ve been hit with injuries, while, on paper, the team we finished the season with was a strong side. We showed it in a couple of the Jubilee League meetings around here, but otherwise we’ve never clicked as a whole team.

“It was painful to lose against Edinburgh tonight. It was our last league meeting and we wanted to do well for the club. The boys were gutted that we were caught at the end. After the meeting, they went on the centre green to say their goodbyes to the fans, and they wanted to do that after a victory, not after a defeat. It sums up the Cheetahs’ season in terms of results – there’s been no lack of effort, but we got pipped at the post.

“But we gave to look at the overall picture and realise what’s been achieved. We’ve already got one of the best stadiums in the country, after all the work that was done over the winter. We can still see the stadium getting better each week, as the stadium gets ready for the return of greyhound racing in a couple of weeks. You can see all the investment. We’ve got some great foundations to build success.

“The support on the terraces was again tremendous tonight. Thank you to the fans for their loyalty this season. I know the future is bright for both this stadium and the speedway here.

“The season here is far from over and we hope the fans come out in force to support the Chargers and their bid to win the National League.”

* OXFORD CHARGERS entertain Mildenhall Fen Tigers in a key National League clash at Sandy Lane next  Wednesday (August 24) at 7.30pm. Tickets will go on sale in due course at www.oxfordspeedway.club/tickets.