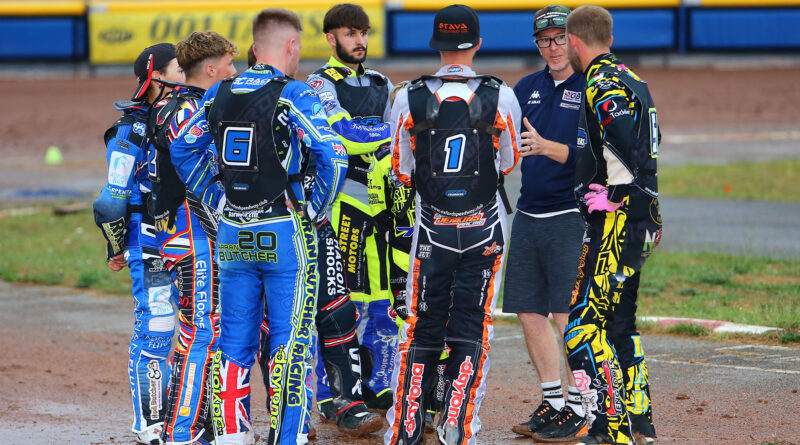 OXFORD CHARGERS passed their toughest test of the season, with an excellent 47-42 away victory at Kent Royals earlier today (Sunday).

It was a massively important win for Chargers. They entered the meeting just one point ahead of Kent in the table, and defeat for Chargers would have seen them pushed out of the play-off places.

But Chargers never looked like losing, flying into a 14-4 lead after three races, extending that lead to 30-18 after eight races, before clinching victory with a 5-0 in an eventful Heat 12.

Luke Crang guested in place of Nathan Stoneman, who was racing for his Championship club Berwick.

Chargers’ skipper Jordan Jenkins was initially ruled out of the clash, after testing positive for Covid late last week, with Adam Roynon pencilled in as a guest. But subsequent further tests proved negative, allowing Jenkins to take his place after Chargers’ management checked the situation with the Speedway Control Bureau.

Kent are based at Iwade, near Sittingbourne, and stage their home meetings on Sundays at 12 noon. On a baking hot day, with temperatures approaching 30 Celsius, it meant track preparation was difficult and track conditions were tricky for the riders.

It soon became apparent that Chargers were adapting better than the home side. Jamie Halder fell in Heat 1, and Jenkins and Henry Atkins took a notable 5-1 over Kent No 1 Alfie Bowtell in the re-run. That lead was doubled after another 5-1 in Heat 2, this time from Arran Butcher and Jacob Clouting.

Kent’s Danno Verge fell and was excluded in Heat 3. The re-run saw a very mature ride from 15-year-old Jody Scott to pass Halder for the victory, while Sam Hagon remounted for third place after a fall.

Royals hit back with a 5-1 in Heat 4, but Chargers responded with a maximum of their own in Heat 5. Atkins won, while Jenkins produced a great pass on Verge on the final lap.

Two shared heats followed, with Chargers finishing in the minor placings in second and third, before they took a 4-2 in Heat 8, courtesy from Atkins and Butcher, after Clouting had been excluded for a second warning for moving at the tapes. That meant Chargers moved 12 points ahead.

Crang looked set to win Heat 9, but was caught on the final lap by Verge, as Royals pegged back a 4-2, but Chargers followed that by holding two 3-3s, again by packing second and third places, as the visitors stayed ten points ahead.

Heat 12 secured victory for Chargers. Kent’s Connor King fell early on, while race-leader Verge clobbered the fence on the second lap and his bike stopped. King, having remounted, fell a second time and the race had to be halted. With King out as the cause of the stoppage and Verge excluded as not under power, Hagon and Butcher took a match-winning 5-0 in the re-run, as Chargers extended their advantage to 15 points at 43-28.

Chargers seemed to also have an excellent chance of picking up a fourth league point for an away win by more than seven points.

But Kent’s top men Bowtell and Ben Morley took 5-1s from both Heat 13 and 15, with Morley completing a paid maximum.

In Heat 13, Jenkins suffered a fall while in second, ahead of Morley, while a ruthless second bend from Bowtell in the final race completely shut out Atkins. With a 4-2 to Kent in between in Heat 14, it meant the final score was 47-42 to Chargers, as Royals made the scoreline a little more respectable.

While Kent relied heavily on Bowtell (13) and Morley (12+3), Chargers were the better-balanced side, with Atkins top-scoring on 9+2. Chargers won the meeting with three heats to spare, despite providing the minority of heat winners, with six compared to Kent’s nine.

Team manager Peter Schroeck said: “Many of our lads hadn’t been to the track in Iwade for quite a few years, but we took control of the meeting from the off. I’d very proud how they battled away, especially since Iwade is quite a tricky, little track to ride.

“Kent’s track staff tried their best, but it was very hot and that does make it very hard to prepare a good track. There were some big ruts, while the dust made visibility a problem. I drummed it into our lads to make the track Kent’s problem and not out problem, to concentrate on our starts, get around the first corner and stay out of trouble.

“Kent’s team is quite top heavy, with riders who bring home the big points, especially later in the meeting. On the other hand, I think our team has quite a nice balance. When I say to the lads ‘no last places’, it’s something we can achieve and then end up on the winning side.

“You can get greedy, because it looked like we could pick up the fourth league point but we didn’t quite get it. But we did what we came here to do, which was pick up the away victory and the three points. It was a great result, a very important result, and I couldn’t be prouder of the team.”