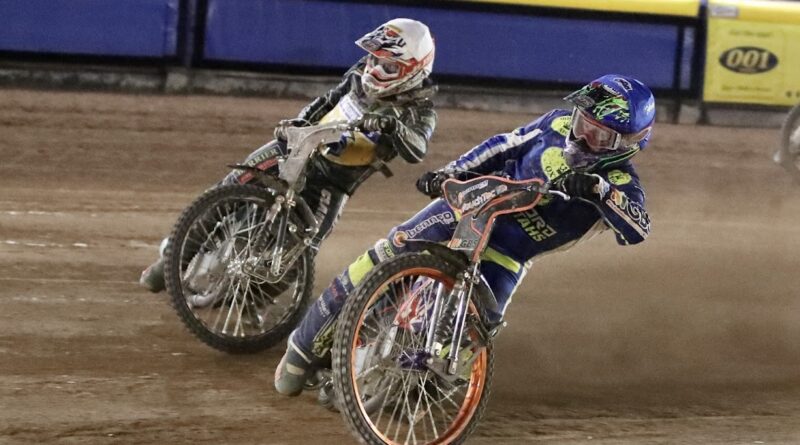 The win means that Cheetahs remain top of the southern section of the Jubilee League. Birmingham and Plymouth are out of contention and it’s now a straight shootout between Cheetahs and Poole Pirates to decide who will qualify for the one-off final at Sheffield later in the season.

Cheetahs and Pirates met twice next week – at Oxford on Tuesday and Poole on Wednesday.

Plymouth were reduced to just four rides very quickly last night. Before the meeting had begun, Ben Barker was ruled out after being declared medically unfit to race, while Alfie Bowtell suffered a knee ligament injury after a coming together with team-mate Ben Morley in Heat 1.

After that, as team manager Peter Schroeck commented: “We can only beat what’s put before us.”

Despite their woes, Gladiators battled gamely, with guest rider Josh Pickering proving a very lively visitor and scoring 17 points in seven outings, although Scott Nicholls and Troy Batchelor both beat him twice.

For Cheetahs, skipper Nicholls scored his first maximum for the club, with a perfect 12 from four rides, including a fine pass of James Wright to win Heat 10.

Aaron Summers (11+2), Paul Starke (9+2) and Troy Batchelor (9+1) also all scored well, but pride of place went to Heeps, who followed up his 11+1 the previous evening in a 45-45 draw at Plymouth with an even better 13+2 at Cowley, including winning his opening three outings.

Speaking post-meeting, Cameron Heeps said: “I’m really pleased that I can start to give something back, because I feel the rest of the boys have had my back all year. I feel they’ve been picking up my slack, so it’s good that I’m now starting to chip in and do my part.

“I’m pleased that we’re still in with a shout in the Jubilee League. We want to get through to the final and then who knows what can happen.

“We’ve done well over the two meetings against Plymouth. It was nice to score a few points down there, but at the same time, it feels like if I hadn’t blown up an engine, we could have won there.

“We managed to fix it and I used the engine today. I knew it was a good engine and we proved that tonight. At Plymouth, I had to switch to my spare bike for my last two rides. Don’t get me wrong, it’s still a decent bike and I scored points on it, but the first one has been going really well.

“We’re looking forward to racing Poole next week. We’ll get our heads down and see what we can do.

“It’s a pleasure riding for Oxford. I was struggling at the start of the season, but they stuck by me and supported me all the way through. The track is awesome, the venue is awesome, and there’s some awesome people around.”