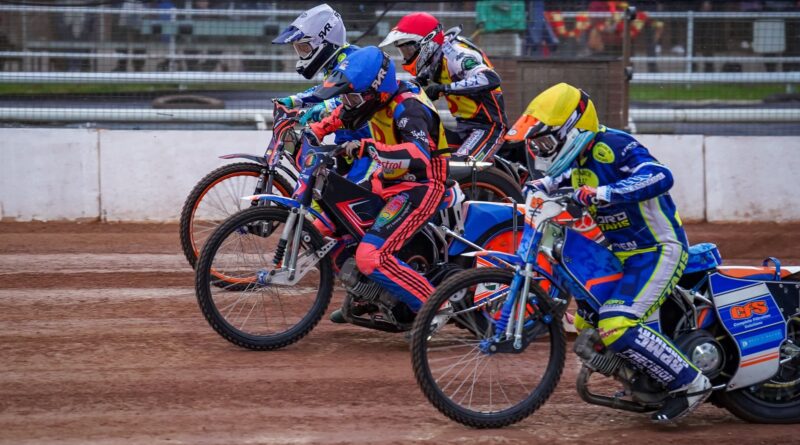 MONARCH Oxford Cheetahs showed plenty of fight and character by taking a 47-43 at Birmingham on Wednesday night, just a day after losing at home to Brummies, writes Rob Peasley.

Just as at Sandy Lane 24 hours earlier, it rained during the meeting – on this occasion, both early in proceedings and then more heavily in the concluding races. There was a downpour shortly after Heat 15.

Nick Morris was again due to guest for Cheetahs, in place of the injured Troy Batchelor, but was left stranded on the M5 after an accident. Chris Harris accepted the guest booking at the 11th hour and did Cheetahs proud.

Oxford got off to a flying start when both Scott Nicholls and Kyle Newman passed Stefan Nielsen to take a 5-1 from Heat 1. Newman enjoyed a good evening and later won Heat 8 in fine style, after passing both Nielsen and James Pearson in fine style.

Brummies moved ahead and led 30-24 lead after nine races. Oxford skipper Nicholls came in Heat 10 as a tactical substitute, and it started a fightback as Cheetahs took three 4-2s in the next four races to level the scores.

Cameron Heeps turned his evening around when he flew out of the tapes to win Heat 14 to keep it level at 42-42 entering the final race.

In the decisive Heat 15, Nicholls took his fifth win in six outings, while Harris won a battle royal with James Shanes for second place, eventually snatching the verdict on the line, as Oxford clinched the meeting with a 5-1.

It was a credit to both sides how they both battled in deteriorating conditions in the closing stages.

While Nicholls (16) and Harris (12+1) did the bulk of Cheetahs’ scoring, every other team member came up with vital points during the evening.

Speaking after the meeting, Oxford skipper Scott Nicholls said: “That was a massively important win for us tonight, to bounce back after losing at home at Birmingham. It’s never nice to lose at home, especially against a team where had conditions been good, I’m confident we could have beaten them.

“Again, it rained tonight, while Birmingham went ahead in the meeting. But we showed a lot of character in the second half of the meeting and came we away with the win.

“It is a team event, but of course, I’m happy to have done well individually. If we all do well individually, we end up winning. I’m pleased I had a good night, because I’d had a few engine problems and it’s a boost for me to get a nice number of race wins under my belt.

“But more than anything, I’m glad we’ve taken another win on the road. Cam (Heeps) has been struggling both with his engines and his confidence, but tonight he took a crucial victory in Heat 14 and that’s helped us win the meeting. He got taken out of a ride, which is always hard, so he’s then showed plenty of character to round off his evening with a win.”