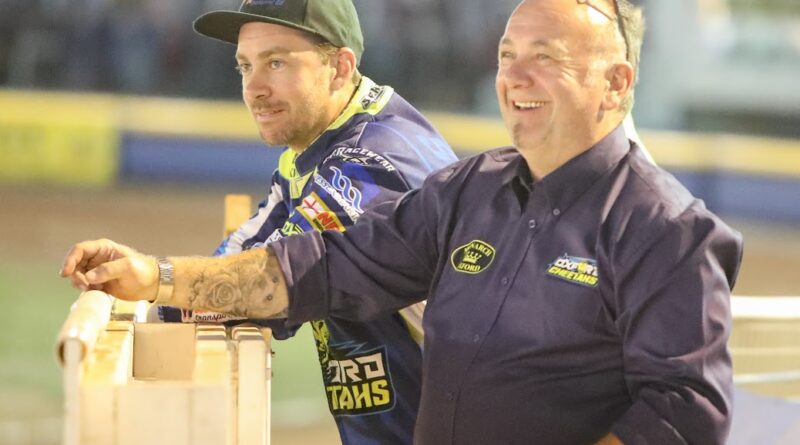 The Cheetahs and Chargers chief will join his riders, fellow members of management and supporters at the club’s end-of-season party held at the Cowley venue on Saturday, November 5.

Cheetahs made a sensational return to British speedway in April following a 15-year absence and raced in the Championship while Chargers became the city’s newest professional sports club by competing in the National League.

Both teams were well supported through the season, and Schroeck hopes to round the year off in style in the company of the club’s supporters who he described as phenomenal.

“Our crowds this season were extraordinary,” said Schroeck. “If you wanted to paint a perfect picture of how a speedway club can rise from the ashes then Oxford is a perfect example.

“Plenty of people say speedway is a dying sport, and we accept times are tough. But this sport is still alive, and it can be promoted to an extent where crowds are drawn back to the terraces.

“The smallest details can make a huge difference, and we owe a lot to our fans for making this year so successful. We never take them for granted and it’s important we look after and value them.

“Hopefully on Saturday we see plenty of familiar faces and can reflect on a positive campaign and look forward to a bright future.”

The club will confirm its 2022 Rider of the Year for the Cheetahs and Chargers squads on the night while ticketholders will be automatically entered into a draw to win Scott Nicholls’ race suit.

Admission also includes a disco and buffet, with fans encouraged to send their favourite photos of the season to feature on a special Wall of Memories.

Despite not lifting any team silverware this season, Schroeck said there is still plenty to celebrate.

“We had injury issues and it dented our progress,” said Schroeck. “With Nathan in the Chargers squad, I believe we would’ve earned our play-off spot with much greater ease.

“But overall is was an enjoyable year and the racing on track was fantastic which is what the public want to see.

“Everyone has learnt a lot this year, including the track staff and volunteers. We’re a closely-knit team and appreciate all the facilities we have at our disposal.

“It’s a fairy-tale story, really. From no club with no home to having a packed stadium every Wednesday – it’s magical to be part of.”

Tickets for Oxford Speedway’s end-of-season party are available online now and can be purchased on the club website. Adults (16+) are priced £18.95 while children can attend for £3.95.

Doors open at 7pm. Supporters wishing for their photo to feature on the club’s Wall of Memories should email club@oxfordspeedway.club.