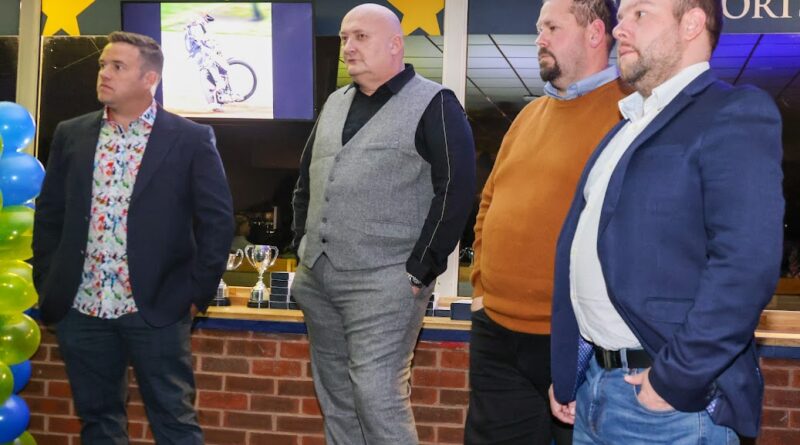 The first half of the evening was covered by various presentations, as well as interviews with managing director Kevin Boothby, promoter Jamie Courtney and team manager Peter Schroeck, and all the riders. Presenter Richard Palmer started the evening, by bringing forward Kevin and Jamie, plus Save Oxford Stadium chairman Ian Sawyer and Oxford Stadium manager David Lestrade – four major figures in the return of speedway to the stadium after a 15-year-gap.

The second half of the night saw a disco with riders, management and supporters all mixing together and letting their hair down.

During his interview, Jamie Courtney revealed just how little time that he and Kevin Boothby had to decide to enter Oxford Cheetahs for the 2022 season.

He said: “I met Kevin just over a year ago around last October. Within a day of that, the British Speedway bosses required to know if we wanted to enter the league. We had to say ‘yes’, otherwise we’d have had to wait another year until 2023.

“I guess it required a certain amount of courage to commit, but I didn’t mind taking that chance and neither did Kevin. I think that’s one reason we hit it off. That commitment paid off, because we’ve enjoyed great crowds and that’s made it a fantastic first year back for Oxford Speedway.

“I care about the product. As soon as I was in at Oxford, I spoke to the stadium manager David Lestrade and talked about widening the track. Other clubs have failed because the track hasn’t been right, but I knew how important it was a track that suits the modern speedway bike.

“I can’t thank everyone enough: the fans, the track staff and volunteers, the contractors, the sponsors, the riders and the rest of the management. It’s been amazing; a real rollercoaster. At times, it felt that we were travelling at a million miles per hour, but it’s been a great season.”

Boothby said: “I think everyone knows that I am a greyhound man. But I watched the Boston Barracudas speedway team when I was young, and I’m become a speedway fan again.

“I do behave like a fan, because I’ve given Jamie and Peter a hard time when the results haven’t been what we were looking for. But they’ve done a great job and what’s been achieved has been amazing.

“I do know what it means to people. I had people coming up to me in tears and thanking me at the opening meeting.

“I’m also like to thank the volunteers. For every speedway meeting, we have 20 to 25 people turn up each week and just help out because they love the sport.

“This is a great stadium and I want what’s best for the stadium, which is both speedway and the dogs. Everyone is one big family.”

Team manager Peter Schroeck said: “Results may not have always been what we wanted, but I can’t fault the efforts that the riders put in.

“I will always take the positives rather than the negatives and I get a buzz every time I walk into this stadium. In some speedway stadiums, you wipe your feet on the way out, at Oxford you wipe them on the way in.

“We’d had phenomenal crowds. I love National League racing and developing the younger riders and it was brilliant how meeting people were coming along not only to see the Cheetahs but the Chargers in their meetings as well.

“We’ve enjoyed a honeymoon period this year, but we now need to get the results, because we are not in the league to make up the numbers.”

Asked if he had a message for the fans, Schroeck said: “We love you.”

Crowds sold out for the first few Oxford Cheetahs meetings and stayed very healthy for the whole season. It wouldn’t have been possible, without a team of dedicated of volunteers and contractors who worked tirelessly to get the stadium into shape just hours before the opening meeting on Wednesday, April 13.

One such volunteer, Colin Pollard, a retired painter and decorator, was handed the Unsung Hero award.

He said: “I’m really honoured to be given an award like this, while it was a real team effort. We were a small team, but we had a great team of guys involved and we completed it just in time.”

A lucky fan, Ellie Lewis, was drawn at random from attendees of the party and won skipper Scott Nicholls’ race-suit.

Courtney announced that season tickets will be available in due course for the 2023 season via the club website.

Rider of the Year – Dillon Ruml

Signing of the Year – Aaron Summers

Rider of the Year – Jordan Jenkins

Achievement of the Year – Jordan Jenkins (for winning NLRC at Scunthorpe)

Signing of the Year – Henry Atkins

Performance of the Year – Nathan Stoneman (for paid maximum at Armadale)

Mascot of the Year (from Supporters’ Club): Chloe Davis

Unsung Hero: Colin Pollard and the whole team who got the stadium ready for opening night.

Plus, there was a special presentation to Peter Schroeck, Kevin Boothby and Ken Soanes (Monarch) from Jamie Courtney.

And the riders from both sides (plus management) were awarded medals for being part of the Oxford Speedway regeneration year.