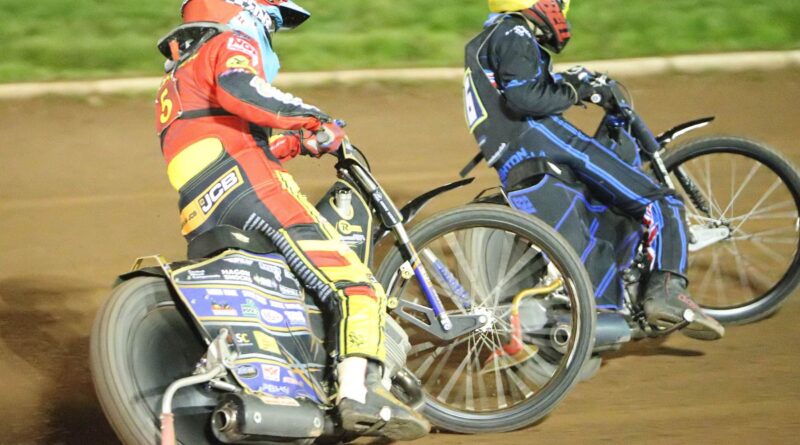 OXFORD Chargers were eliminated from the National League play-offs, after a 38-52 defeat at Leicester last night (Saturday), as the Leicester Lion Cubs progressed to the play-off final with a 96-84 aggregate victory.

Chargers, who won the first leg at Sandy Lane on Wednesday by 46-44, played their full part in an absorbing meeting and were only four points down on aggregate with three races to go.

Oxford were without no fewer than four injured riders – Nathan Stoneman, Sam Hagon, Arran Butcher and Luke Killeen. Nevertheless, they gave Lion Cubs one of their toughest home meetings of the season.

15-year-old Ashley Boughen, a British Motocross Champion who only first rode speedway four months ago and has been taken under the wing of Oxford team manager Peter Schroeck, again excelled with nine points, including two race wins. He was all set to defeat Joe Thompson in Heat 11 but lost his steel shoe and was passed on the final corner, while he defeated another Leicester heat-leader, Connor Coles, in fine style in Heat 12.

The transfer deadline has expired, so Boughen was nominally an unattached three-point replacement for the injured Butcher. But it would be a surprise if Boughen – who also scored 7+1 in his NL debut at Oxford – wasn’t part of the plans for the 2023 Chargers.

Oxford asset Henry Atkins (11+1) also enjoyed a fine evening and top-scored for Chargers. He was the only Oxford rider to finish ahead of either Thompson twin when he beat Joe Thompson in Heat 4. Skipper Jordan Jenkins (9+1) also won a couple of races, while guest rider Adam Roynon (8) was also right in the mix.

Chargers were handicapped by a heavy fall by Jody Scott in Heat 3. 15-year-old Scott has been remarkably consistent this season, scoring at least paid seven in ten previous appearances for the club, only two of which were at reserve. But with his No 1 machine wrecked, he didn’t look his usual self. He’s done a remarkable job this season and clearly is another with a big future in speedway.

Jenkins looked all set to take a race victory in Heat 1, but Dan Thompson swept around him on the final lap, and Jenkins and Atkins had to be content with a 3-3.

Boughen was the early leader in Heat 2, but Vinnie Foord forced his way under Boughen on the third bend and Boughen slipped wide and dropped to the back behind Mickie Simpson and team-mate Jacob Clouting, as Lion Cubs took a 5-1 maximum.

Coles soon overhauled Roynon in Heat 3, while the race was awarded as a 4-2 to Leicester after Scott’s fall.

Atkins won a shared Heat 4 in a fast time over two seconds faster than Heat 1. Jenkins and Roynon briefly held a 5-1 into the first corner in Heat 5, but Roynon was then overtaken by both Lion Cubs. Roynon repassed Tom Spencer for third on the second lap, with fourth-placed Spencer falling later on the lap, as Chargers took their first-heat advantage of the night with a 4-2.

Dan Thompson won Heat 6 in a time just 0.19 outside the National League track record at Beaumont Park, after Atkins pushed him all the way, as Lion Cubs took 4-2s from both Heats 6 and 7 to move six points ahead on aggregate.

Chargers hit back a 4-2 of their own in Heat 8. Jenkins won the race, while Boughen collected his first point by heading home Simpson.

Atkins won a shared Heat 9, while Lion Cubs edged a 4-2 in Heat 10, with Scott forced out by an early engine failure. At the interval stage, Lion Cubs led 34-26 on the night and 78-72 on aggregate.

Boughen made an excellent start in Heat 11 and Joe Thompson set off in pursuit. Boughen’s steel shoe worked loose and then came off completely, as Thompson – a regular for the Leicester Lions Championship side – was spared the blushes of losing to the 15-year-old on the final corner of the race. With Jordan Jenkins in third, the race was shared.

Boughen again made the start in Heat 12, while Coles had to fight off Roynon for second place in an opening lap battle. But Coles – who has ridden for both Scunthorpe and Plymouth in the Championship this season – simply couldn’t get on terms with the flying Boughen, as Chargers closed back to four points on aggregate with a 4-2.

Heat 13 was a hammer blow for Chargers. Twin brothers Joe and Dan Thompson both made the start and pulled away to a 5-1.

Chargers needed a 5-1 from Heat 14 to take the tie to a final heat-decider. Boughen took the lead on the opening bends, but Scott was relegated to the back. Despite another very impressive race win from Boughen, the 3-3 saw Lion Cubs progress to the final.

In Heat 15, a tapes exclusion for Roynon saw Boughen given an opportunity against the Thompson twins. But was he hampered by clutch problems and finished last. Atkins made the start, before Dan Thompson flew around him on the opening bends to complete his paid maximum. Atkins held second, but slipped wide on the final end, and Joe Thompson came through and Lion Cubs finished with a 5-1.

Ashton Boughen said: “I couldn’t have asked for much more from my first two meetings. I got used to Oxford after a few rides on Wednesday and it started slowly today, but I then got myself sorted.

“I was winning my first race tonight, but I slid out wide and that unsettled me for a couple of rides. Peter (Schroeck) has helped me a lot with my speedway racing. Today, I was just getting a bit angry with myself after my first two races, so Peter just had a quick word with me and told me to calm bit a down and it helped me a lot. After that, I was just having fun and riding how I usually ride.

“It was nice to win some races. There was another one (Heat 11), when I came into the last corner and my steel shoe came off and I got passed in that one because of that.

“I did four races close together and in my last race (Heat 15), the clutch getting a bit hot and slipped. But it was a good night for me in only my second meeting – there’s a lot of positives for me to take.

“In my motocross, it was about individual racing, so it is different coming into speedway which is a team sport. The other lads helped me out, while Peter has given me a lot of advice.

“A big thank you to my dad (Brad), to Peter, to Nathan Stoneman for spannering for me, and Wesley, who both mechanics for me and is my main sponsor.”

Team manager Peter Schroeck said: “Congratulations to Leicester on reaching the final. It wasn’t our day, although I’m proud of the effort put in the boys who got stuck in and did everything they could.

“Disappointed is not the right word, because I’m not. One team always has to lose out and today that was us. But we’ve reached the play-offs, which makes us one of the top four teams in the country, which is a superb effort for our first year and there’s so much to be happy about with Chargers.

“Ashton was phenomenal towards the end of the meeting. He was so quick when out in front. He would have beaten Joe Thompson around here, but his steel shoe was dangling and then came off, and he did beat Connor Coles. I’m delighted to see him doing so well.

“We had a couple of things go against us. Jody crashed in his opening ride and he wasn’t his usual self after that. Jody has been superb this season and he was due a bad one eventually – it’s all part of being a speedway rider. His best bike got smashed up in his fall and he was climbing the hill after that. It’s all part of the learning process and he can go into the winter with his head held high.

“Leicester are a very good side and we pushed them all the way and we can be proud of that. They didn’t have it all their own way – Henry took some points off their top lads and so did Jordan. Leicester told me it was one of their best home meetings of the season, because we came and gave them a match, where they’ve been steamrollering some of the other teams around here.

“I also want to thank the fans for their support over the season. It was great to see so many supporters there today on the first bend and we went over to them after the meeting to thank them.

“We’ve proved that can box in this league and we’re already preparing for next season.”