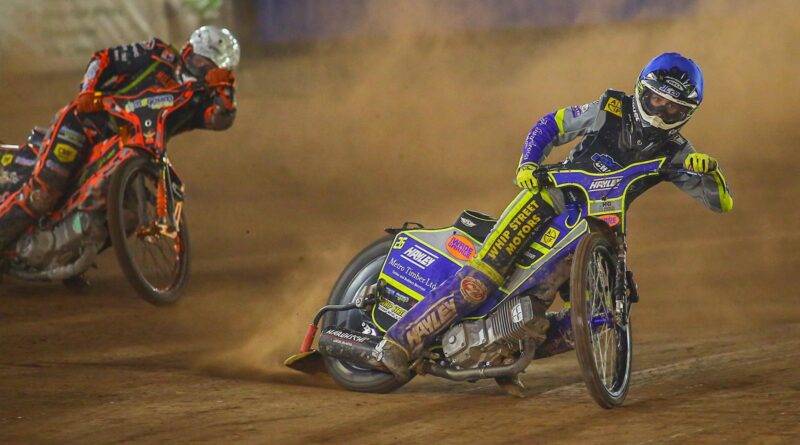 Oxford Chargers conclude their National League campaign on home shale this evening when hosting Kent Royals in a must-win fixture if play-off hopes are to be kept alive (7.30pm).

Fifth-placed Chargers are required to beat Kent and hope Belle Vue Colts – currently fourth – only secure one league point from their remaining two meetings away to the Royals and Armadale Devils respectively.

Jason Crump and Peter Schroeck’s side have been boosted by news that skipper Jordan Jenkins will return to the team, although fans’ favourite Nathan Stoneman remains out with a shoulder injury.

Tracking six of his seven riders, Joint Team Manager Schroeck has every confidence his side can place plenty of pressure on Belle Vue as the race for the play-offs heats up.

“We’ve got to keep believing,” said Schroeck. “It would be nice to be in control of our own fate, but the reality is we don’t have that luxury.

“What we are in control of is tonight’s meeting and doing everything possible to collect three points and put the pressure on Belle Vue Colts.

“We’re the only team to have beaten Kent at their home track this season, so it goes without saying that they’ll be fired up for this one. Having Jordan (Jenkins) back in the squad is a boost, but we’ll need a complete performance if our play-off hopes are to remain alive.

“We have the talent, we just need to put it into practice.”

Only 10 league points separate the division’s top six teams with six fixtures remaining this season – making it one of the most competitive seasons in recent years.

Ahead of this evening’s showdown, Schroeck paid tribute to the commitment and determination displayed by all teams and riders in British Speedway’s third tier and believes the future is looking bright.

“It’s been a challenging league on track for all teams, not just ourselves,” said Schroeck. “Armadale and Plymouth have struggled at times, but the top six are all capable of beating each other over two legs.

“It’s testament to the talent British Speedway is producing and how riders can quickly adapt to different surfaces and tracks. The National League can confidently state to be one of the world’s best development leagues.

“The likes of Tai Woffinden, Dan Bewley and Robert Lambert have all graduated from this level and are now enjoying successful careers at Grand Prix level.

“Regardless of if we make the play-offs this year, there is a bigger picture to our participation and we’re pleased with the progress our riders have made.”

Tickets for the final programmed speedway meeting at Oxford Stadium this season are on sale now and can be purchased by clicking here. Tapes-up is at 7.30pm.