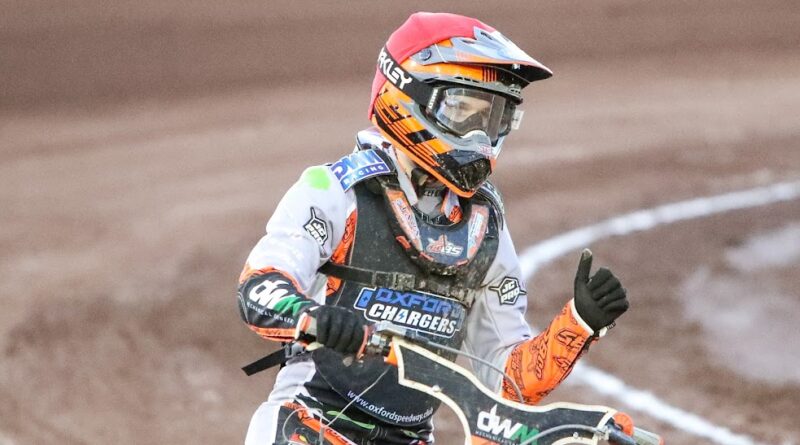 Jordan Jenkins has every faith that Oxford Chargers can poach the final National League play-off spot ahead of this evening’s crunch visit of rivals Kent Royals to Oxford Stadium.

Chargers must beat Royals tonight and then hope fourth-placed Belle Vue Colts lose by seven points or more when visiting bottom side Armadale Devils next Friday, September 30, to qualify.

Rider replacement will be operated in Stoneman’s absence while Adam Roynon and Kai Ward have been booked as guests for Hagon and Clouting respectively.

Despite missing three of their seven riders, Jenkins believes Chargers will rise to the occasion and put the pressure firmly on Belle Vue ahead of their trip to Scotland next week.

“There is pressure on this meeting, and we need to perform from the opening heat,” said Jenkins. “We’ll give 110% and do everything in our control to get a result and put the pressure back on Belle Vue.

“I won the title with Mildenhall last year and want to repeat that again with Oxford in the coming weeks. It’s out of our control in a way as even with the best result tonight, Belle Vue can still go and earn the points they need to qualify.

“But it’s been a great first season with Oxford and the lads deserve a place in the play-offs, so we’ll make sure we go out to win every race and take maximum points.

“Kent are solid throughout but likewise everyone in our corner is capable of winning races. These are the meetings you want to be part of and hopefully we can take the play-off race down to the wire.”

Supporters are reminded tickets for the original staging of this fixture on Wednesday, September 7, remain valid after the previous meeting was postponed due to a lack of medical cover.

Jenkins shared supporters’ frustrations but vowed to do everything in his control to extend the season beyond tonight and reward fans for their loyalty and patience.

“For a National League club to attract so many supporters for each home meeting has been great,” said Jenkins. “Hopefully this isn’t our last meeting, and we can repay the supporters with some play-off speedway because it is what they deserve.

“They’ve backed the club’s first season and every time one of us wins a race we enjoy going around to take in the applause. It’s been great to be part of and we’re not ready for the season to end just yet.”

Tickets for tonight’s National League fixture between Oxford Chargers and Kent Royals are on sale now and can be purchased by clicking here. Tapes-up at Oxford Stadium is at 7.30pm.