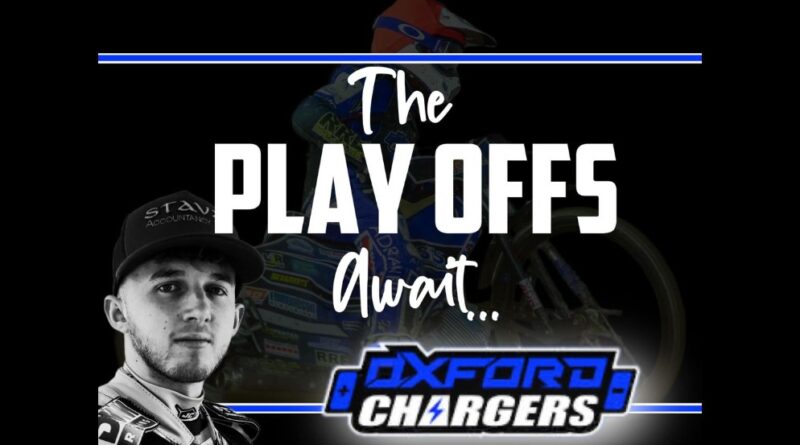 OXFORD CHARGERS will take their place in the National League play-offs, after rivals Belle Vue Colts slipped up at Armadale earlier tonight (Friday).

Belle Vue Colts needed just a single league point from the encounter in Scotland – Colts could even afford to lose provided it was by less than seven points. But, Armadale Devils, who were bottom of the National League going into the encounter, turned the formbook upside down and registered a 51-36 victory that broke the hearts of the Colts.

Chargers finish in fourth and will face the top-placed team in the semi-finals. The first leg will be Oxford’s home leg and will take place at Sandy Lane next Wednesday (October 5th) at 7.30pm.

Their opponents could be Mildenhall, Berwick or Leicester, with the outcome due to be decided at the Leicester v Berwick meeting on Saturday evening.

Chargers looked set for a play-off place for most of the season but suffered a double defeat to Mildenhall in late August, at a time that both top pair Jordan Jenkins and Nathan Stoneman were both on the sidelines.

Chargers ended their regular NL matches with a massive 60-29 victory over Kent, that ended Royals’ play-off chances, and lifted Chargers into the vital fourth spot, and were then left sweating on Belle Vue’s result in their final meeting at Edinburgh (Armadale).

Oxford Chargers’ team manager Peter Schroeck exclaimed: “It’s unbelievable! It’s brilliant that Chargers are in the play-offs. I feel we definitely deserve our place – as we’ve had more than our fair share of bad luck over the season.

“I’ve said all along we’ve had a great season whatever happens, because it’s our first season back in speedway after 15 years, and we’re still building. Just over a week after we were saying our goodbyes at Oxford, the fans have got a chance to come to the track and support the Chargers again – it’s going to be a great occasion.

“It’s a great achievement to reach the play-offs and I’m so pleased for everyone connected to the club – Jamie (Courtney), Kevin (Boothby), all the riders, all the fans, everyone.

“We knew it was out of our hands and we needed Belle Vue to slip up. But that’s the exciting thing about National League – it’s so unpredictable and anything can happen.

“I had a bit of a set-to with the Edinburgh management when the Cheetahs were up there earlier in the season, but I think it’s time to say a big thank to everyone involved up there, for making sure their riders went out with the right attitude against Belle Vue.