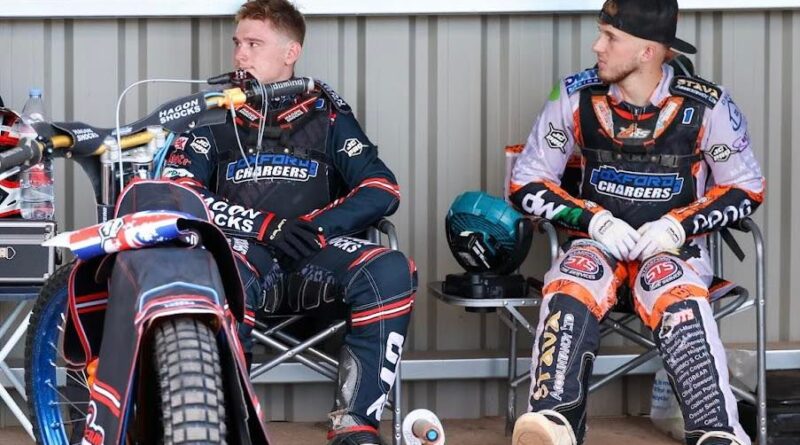 THE Oxford Chargers pair of Jordan Jenkins and Sam Hagon battled through to the semis of the National League Pairs at Leicester last night (Saturday), before falling to favourites Leicester Lion Cubs.

Chargers – who were blocked from using Henry Atkins as a partner for Jenkins – made it through a tough Group B, finishing a point clear of Mildenhall Fen Tigers, their opponents in two National League meetings in the forthcoming week. And despite Jenkins giving twins Dan and Joe Thompson their toughest race of the evening, it was Leicester pair who took a 7-2 semi-final victory to book their place in the final, where they duly beat surprise packets Armadale.

Track conditions were tricky early on, with no better evidence than the Heat 2 clash between Mildenhall and Kent. Sam Woolley fell on the second bend and dragged his machine from the track, while his partner Ben Morley was suffering with bike problems and it seemed to present Fen Tigers with an easy 7-2. But Jack Kingston fell on the second bend of the second lap and had to remount and race-leader Jason Edwards all but followed after spinning in the same place on the following lap. Mildenhall eventually took a 7-2 over the ailing Morley, but it showed conditions were challenging to say the least!

Chargers entered the fray in Heat 4 against Plymouth Centurions. Jenkins led out of the gate but was soon in trouble and experienced opponent Adam Roynon moved inside him. Meanwhile, Hagon looked ill at ease, and despite trying everything, he could not get past Rhys Naylor, as Chargers conceded a 6-3.

By the time that Chargers re-emerged in Heat 8, there had been a lengthy track grade plus a further enforced sun break, and the track was far less rough. Jenkins and Hagon made decent starts, but Hagon was swallowed up by the Mildenhall pair of Jason Edwards and Jack Kingston on the back straight. But Kingston was going too fast and failed to negotiate the third bend, remounting at the back. With Jenkins taking a comfortable victory over Redcar team-mate Edwards, Chargers clawed themselves back into contention with a 6-3.

Chargers final race was against Kent in Heat 10. Jenkins won by a street ahead of Morley, while Hagon took another key third place, as a 6-3 made almost certain of Oxford’s place in the semis.

There were several permutations entering Heat 12, the final race in Group B. But a 5-4 for Plymouth booked their place in the semi-finals as group winners, while Mildenhall were eliminated. Chargers finished runners-up in the group, one point behind Centurions.

In the meantime, Leicester won Group A with a maximum 21 points, thanks to three untroubled 7-2s for the Thompson twins. Armadale rode well as a pair, and a 5-4 over struggling Belle Vue in Heat 11 secured their place in the semi-finals, one point ahead of Berwick.

The first semi-final brought Leicester against Oxford. Jenkins was level with Dan Thompson out of the gate and they battled away, before Thompson took control of the race. With his twin brother Joe in third ahead again of Hagon, Lion Cubs already had a 6-3. That became a 7-2 after Joe Thompson fought past the battling Jenkins after a couple of laps. Chargers were out, but unlike several of the other fancied contenders, at least they lost of the odds-on favourites.

The second semi-final saw Naylor fall off by himself on the first bend. He tried it on and stayed down, but the referee was having none of it and excluded him from the re-run, as Armadale booked their place in the final with a 5-4.

The final was an easy 7-2 for Leicester over Armadale, as the Thompson twins went through the whole evening unbeaten by an opponent.

Oxford Chargers skipper Jordan Jenkins said: “The Thompsons were always going to be hard to stop around here. It’s a shame we couldn’t have finished top of our group, because that would have given us an easier semi-final and given us a chance of reaching the final and facing Leicester in that race.

“The track was a bit tricky early on, and I had to settled for second place in our first race. But I was making some good starts and had good speed and we made the semis. It gave Sam some experience of a meeting like this, which is always good.

“I gave it my everything. In the semi-final, I set up my bike to pull and it was a little too much and the Thompsons got past me. I’ll note that down for next time and learn from it.

“You know what you’re going to get from the Thompsons around here. They’ve done more laps around here when any rider around any track in the last 10 years. The main thing is everyone went home safe today, and congratulations to Leicester on their win.”

* OXFORD CHARGERS are in action at Sandy Lane this Wednesday (August 24) at 7.30pm, when they entertain Mildenhall in a crucial National League clash. A victory would go a long way to securing a play-off place for Chargers.