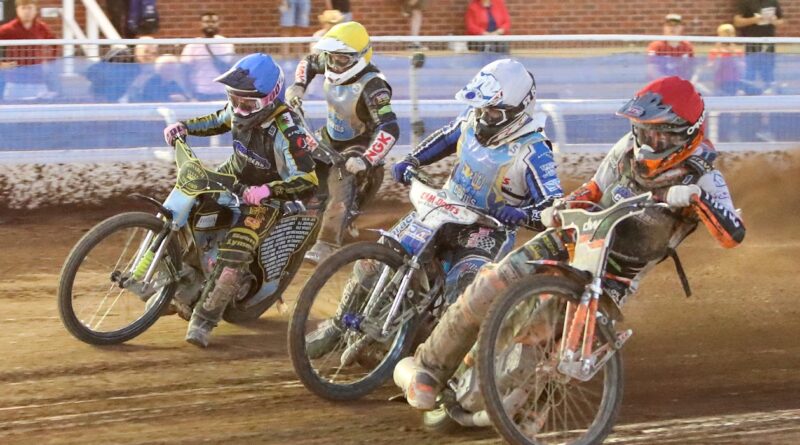 OXFORD CHARGERS skipper Jordan Jenkins was delighted by the performance of the entire team, as they scored a 65-25 victory over Armadale Devils at Sandy Lane last night (Wednesday), which moved them back to third place in the National League table and strengthens their position in the chase for one of the four play-off places.

Chargers took complete control of the meeting at 14-4 after three races, and victory was in the bag by the interval stage (Heat 11), at which point the score was 48-18.

Despite the margin of victory, there was some good racing on display. 17-year-old Sam Hagon came from behind in all three of his race victories, passing Tom Woolley in Heat 3 and Heat 12, and Danny Phillips in Heat 9.

In Heat 5, Hagon was pipped to the post to the race win by Lee Complin after drifting wide coming off the final bend – his only dropped point of the evening.

Stoneman had to fight hard for his paid maximum. He picked himself up off the track to win Heat 4, after a first bend incident in which Danny Phillips was lucky to avoid exclusion after coming down and bringing down Stoneman with him.

Complin lost control on the second bend in Heat 11, and for a moment, Stoneman looked in a tricky position outside the veteran Yorkshireman. But Stoneman cut to the inside as did team-mate Arran Butcher, as Complin ended up baulking team-mate Josh Embleton, as Chargers streaked away to a 5-1.

Stoneman was beaten from the tapes by Phillips in Heat 15, but he raced around him after two laps to join Jenkins at the front. Phillips then fell and the race was awarded as a 5-1 to Oxford – their eighth maximum heat win of the evening.

Three of those 5-1s came from the classy Jenkins / Atkins opening pairing. Neither of these two riders came close to defeat all night.

It could have been nine 5-1s had the impressive Butcher not fallen while leading on the final bend of Heat 14, while set to take a maximum heat win with Jody Scott. Meanwhile, Jacob Clouting shrugged off a last place in Heat 4, to collect a 5-1 with Atkins in Heat 8 and then was closing in on second-placed Woolley in Heat 12.

The overall performance was almost perfection by Chargers, who dropped only a total of 10 points all night from 15 races. They are back in action at Cowley next Wednesday (August 10), when they race against Belle Vue Colts, the side that they displaced from third last night.

Chargers’ skipper Jordan Jenkins, who celebrated his 21st birthday on Tuesday, said: “It was a great team performance from us. Armadale might not be the strongest team on paper, but we still had to beat them, and we did it well. Every one of our riders had strong races during the evening, and with three of us ending up on paid maximums, it shows how strong we’ve been tonight. Plus a 65-25 win is good for our pockets!

“I’ve been lucky in the number of the meetings I’m riding in this year, while some of the other lads aren’t quite as lucky, so I’m trying to pass on a bit of knowledge.

“I spent a bit of time with Jacob (Clouting) tonight. We changed a few things on his bike, ready for his next ride, where he was off gate 1. He was then a completely different rider and had a really good race. A few of these lads just need a little bit of confidence, and we can give them that by giving them the support and then they will be winning races for fun,

“We’ve now riding regularly around here for the rest of the season, and it’s just what we need, because we can find a bit of consistency.

“We’ve got to carry on our form next week against Belle Vue. That’s another meeting we have to win, and we need to take advantage of some of the lesser experienced riders that they’ve got. We’ve got a few meetings left and there’s no reason why we can’t do some damage in this league.”

* OXFORD CHARGERS are back in action at Cowley next Wednesday (August 10), when they race against Belle Vue Colts, the side that they displaced from third last night.

* MONARCH Oxford Cheetahs put up a fighting effort at Poole last night, leading by eight points at one stage, but eventually lost 42-48. Poole Pirates clinched their place in the Jubilee League final to be held at Sheffield later in the season.