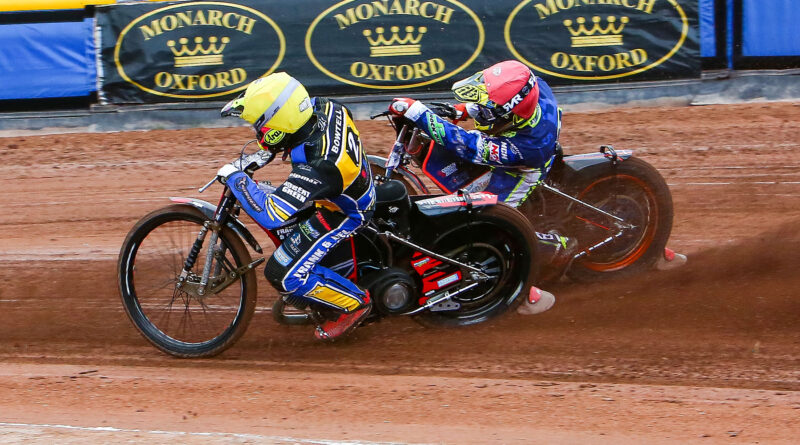 MONARCH Oxford Cheetahs moved to the top of the southern section of the Jubilee League, after being involved in a thrilling 45-45 draw at Plymouth last night (Tuesday).

Cheetahs are in first place on the basis of their superior race points difference compared to Birmingham, as both clubs have six points. The big danger in the group are Poole Pirates, who have four points from just one meeting.

Cheetahs can further consolidate their place at the top with a victory over Plymouth Gladiators in the return fixture at Sandy Lane tonight (Wednesday) at 7.30pm.

Last night’s encounter was a see-saw match, in which the lead switched hands on no fewer than six occasions, including every race between Heat 5 and Heat 9.

Cheetahs got off to a poor start, as Gladiators moved into a 12-6 lead, but then took two successive 5-1s, from Troy Batchelor and Nathan Stoneman in Heat 4, and from Scott Nicholls and Paul Starke in Heat 5, with Starke battling from fourth to second in the early stages of the latter race.

Very unusually every race from Heat 3 to Heat 9 was a maximum to one side or the other, while both teams can point to losing points due to falls on a tricky track surface.

Cameron Heeps enjoyed a good night and he passed the previously unbeaten Alfie Bowtell for claim second place in Heat 9 and join Batchelor for a 5-1. But Heeps suffered an engine failure in Heat 10 while third, as Plymouth levelled the scores at 30-30 with a 4-2.

Cheetahs saw further points slip through their fingers when Starke suffered a fall while third in Heat 11, although Nicholls minimised the damage by winning the race.

Gladiators moved ahead with a 4-2 in Heat 12, while nerves were still to get a bit frayed during a Heat 13 that saw both Ben Barker and Nicholls warned for moving at the start. Barker – who had earlier produced an exciting burst to pass both Heeps and Batchelor during Heat 6 – eventually won a shared race.

Just when the match seemed to slipping from Oxford’s grasp, there was a further twist in Heat 14, when race-leader Adam Roynon came down and a 4-2 to Plymouth changed to a 4-2 to Oxford courtesy of Heeps and Aaron Summers, to level the scores entering the final race.

In the decisive Heat 15, it was Ben Barker who showed first. Nicholls was very close to him early on, but the race then settled down a 3-3, with Nicholls and Batchelor in second and third ahead of Alfie Bowtell, while race winner Barker completed a six-ride paid maximum.

Team manager Peter Schroeck said: “Plymouth is a long way to come, so if we’d left with nothing, we’d have been gutted. Instead, we’ve taken two points for an away draw and we’ve got to be happy with that.

“It’s a tough track and it was pretty rough today. It’s not great using rider replacement for a rider fifth in our averages, because it’s quite restrictive, although Cam (Heeps) had a good meeting from reserve which helped us a bit with that.

“Someone was looking down and helped us in Heat 14. It wasn’t going our way, but then Adam (Roynon) came down. He just slipped off, he wasn’t hurt or anything; it was just a bit of luck for us. Earlier in the night, we’d lost points, and it all evened itself out. The draw was a fair result – it was a close meeting throughout that went down to the wire.

“We’ve now got to follow this up by not slipping up and by beating Plymouth at home. If we can get another three points against Plymouth, it leaves our destiny in our own hands heading into the two matches against Poole next week, when hopefully Jack Thomas will be back again. His left wrist swelled quite badly after riding at Birmingham, but he’s been resting it, and hopefully he will be back next week.”

* MONARCH Oxford Cheetahs are expected to track the same team for the home meeting against Plymouth Gladiators at Sandy Lane tonight (Wednesday) at 7.30pm. Meanwhile, Gladiators are due to bring in Josh Pickering and Jake Mulford, instead of Adam Roynon and Connor Coles.