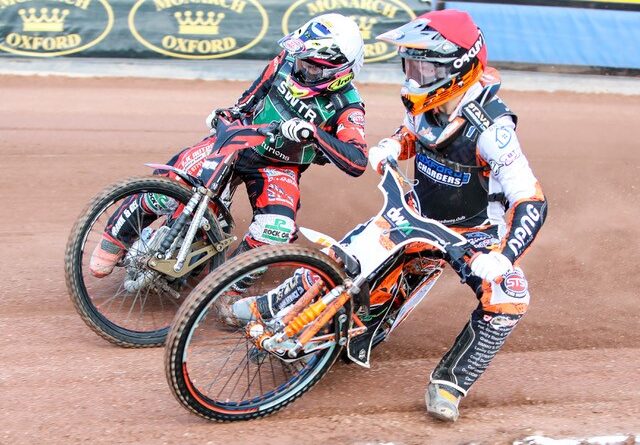 Oxford Chargers moved back up to third place in the National League table with a 50-39 win over Plymouth Centurions at Oxford Stadium last night (Wednesday).

Chargers were using rider replacement for the retired Ben Hopwood, while unattached Jacob Fellows replaced the injured Jody Scott at reserve. In a solid performance for Oxford, all five of their regular team members were paid for double figures.

It was Chargers’ third successive victory and was achieved more easily than the final score line suggests. The meeting was more-or-less in the bag at the interval stage, at which point Chargers led by 39-21, after successive 5-1s in Heats 9 and 10.

Nathan Stoneman took an alarming fall in a first bend incident with Centurions’ guest Alife Bowtell in Heat 11 but continued in the meeting.

There were plenty of fireworks in a highly eventful Heat 15. Jordan Jenkins, aiming to hit back after a defeat to Bowtell in Heat 13, went for an inside move, but ran out of room and spun around before falling and was excluded. The next two attempts to hold the race both resulted first bend falls for Stoneman, with the wrath of Oxford fans increasingly directed at Bowtell, who they considered the guilty party.

In the fourth and final staging, Stoneman lost his steel shoe early in the race, but still went in pursuit of Bowtell. He eventually fell on the third lap, allowing Centurions to close the gap with a consolation 5-0.

Speaking post-meeting, team manager Peter Schroeck said: “I guess we could have ended up with a bigger win, but the final few races got a little bit messy. I think all the lads are okay, although Nathan Stoneman might be a little sore in the morning.

“All our riders gave it their best and it was a proper team performance tonight, which I’m proud about.

“Sam Hagon didn’t have such a good one in the previous meeting here, but tonight he had a really impressive night and he justified being given the No 3 race jacket. Both Jacob Clouting and Arran Butcher were also paid for double figures and that’s something they can take forward.

“The whole team got stuck in and did their job. Even Jacob Fellows, who came in for us at No 7, contributed to the team effort and we are going to use him again at Belle Vue again on Friday. It was a very positive night and means we go to Belle Vue in good spirits.”

Sam Hagon said: “I’m happy with scoring ten points and winning two races, but to be honest, I still made a couple of silly mistakes and I could have scored more.

“We are still learning the track. Nathan and Jordan have had a few more meetings around here, but for most of us this was our third experience of riding the track if you include the practice day.

“Three wins out of four so far is really good for the team, especially if you think that we’re a new, or rather, returning track. I’m happy to be involved in the regeneration of Oxford Speedway – this is a good club to ride for.”

For the visit to Belle Vue in Manchester on Friday (1pm start-time), Ben Morley will step in to guest for Jordan Jenkins, who is riding for his Championship club Redcar at Scunthorpe. Jacob Fellows will again cover the No 7 position for Chargers.